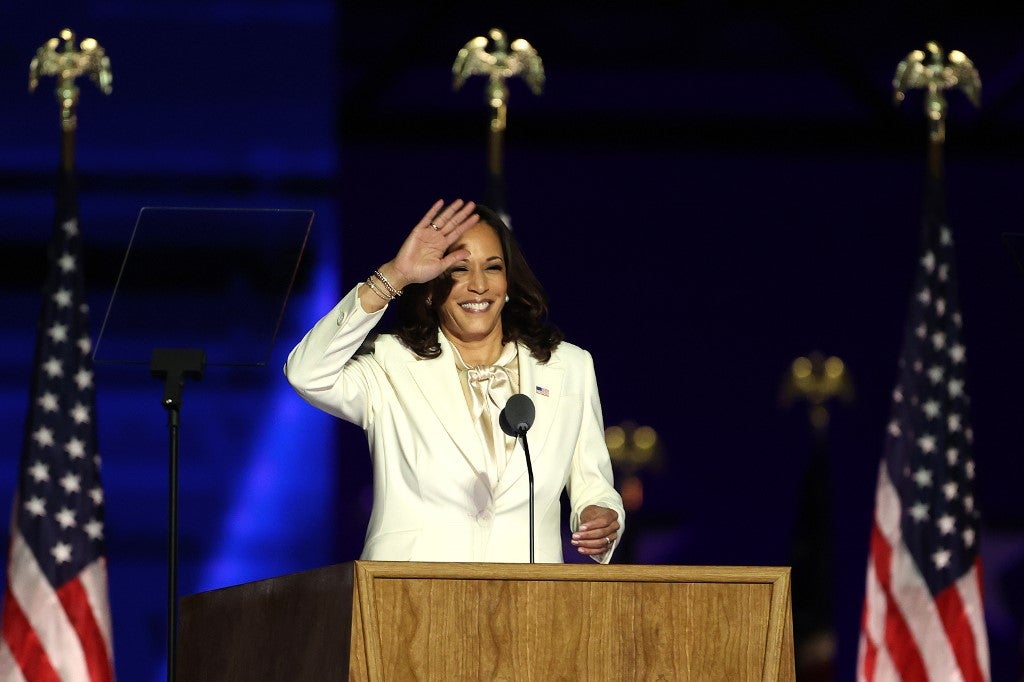 Vice President-elect Kamala Harris speaks on stage at the Chase Center before President-elect Joe Biden’s address to the nation November 07, 2020 in Wilmington, Delaware. After four days of counting the high volume of mail-in ballots in key battleground states due to the coronavirus pandemic, the race was called for Biden after a contentious election battle against incumbent Republican President Donald Trump. Tasos Katopodis/Getty Images/AFP

WILMINGTON, United States — Kamala Harris on Saturday shattered barriers to become the first woman vice president and, in a symbolism-heavy victory speech, told girls she would not be the last.

Introducing President-elect Joe Biden in an optimism-fueled outdoor rally, Harris — also the first Black woman and Indian-American as vice president — sported a white suit in recognition of the suffragist movement that fought to give US women the vote a century ago.

“While I may be the first woman in this office, I won’t be the last,” she said to cheers and honks from the crowd gathered in socially distanced cars.

“Because every little girl watching tonight sees that this is a country of possibilities.”

Harris vowed to fight to “root out systematic racism” but, like Biden, made a broad appeal to unity, saying that Americans “have elected a president who represents the best in us.”

The California senator’s speech was in itself a sign of the prominent role that she has been given by Biden, with newly elected presidents historically keeping the spotlight on themselves rather than sharing the podium with their number twos.

A beaming Harris raised her hands in celebration as she entered to the energetic beats of Mary J. Blige’s song “Work That,” an ode to Black women’s self-confidence.

She opened immediately by hailing John Lewis, the civil rights icon turned congressman who died in July — and whose state of Georgia startled pundits with its sharp swing in Tuesday’s election toward their Democratic Party.

Harris also paid tribute to her mother, Shyamala Gopalan Harris, who emigrated from India when she was 19 and died in 2009.

“Maybe she didn’t quite imagine this moment,” Harris said.

“But she believed so deeply in an America where a moment like this is possible.

“So I’m thinking about her and about the generations of women — Black Women, Asian, White, Latina, and Native American women throughout our nation’s history who have paved the way for this moment tonight.”