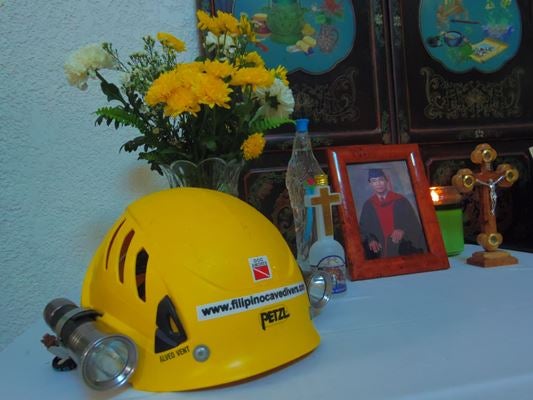 His last days were spent cave diving and writing a book about it.

Cebuano cave diver Dr. Alfonso “Doc Al” Amores was on top of his game as a reconstructive surgeon in the United States, but gave it up to pursue his love for cave diving in the Philippines. His book, although unfinished, would serve as a family reminder of his love for cave exploration and discovery.

His discovery of the Pawod Underwater Cave System in barangay Agus, Lapu-Lapu City has opened opportunities for Filipino scuba divers to be trained in cave diving – a training only professionally acquired in a controlled environment in Florida, United States.

The Pawod cave system, Amores said, could give clues on how Mactan Island was formed, and it direly needs protection.

For Amores, cave diving is about exploring the part of the earth where our history is waiting to be discovered and studied.

“If we can explore the moon why can’t we explore the caves. It is rich in geographical and paleontological records,” Andy Berame, Lapu-Lapu Coastal Operational Coordinator recalled how Amores told him during one of their exploratory dives.

Cave diving was not as popular as scuba diving in the Philippines before Amores and Bernil Gastardo started the Filipino Cave Divers Association last year.

The safety of this outdoor adventure was challenged after Amores died while setting up a guide-line for a television crew for a wildlife video documentary in Hinatuan Enchanted River in Surigao City. He was not the first to discover it but he was the first to discover the deeper chambers of the cave.

Amores was with two of his cave-diving students including Jaime Lapac on June 17.

Before heading out of the cave, traversing a narrow passage, Lapac was surprised that Amores changed the order of the way out, asking the two cave divers to go ahead of him.

“We were surprised but we could not argue because he was directing us. But I noticed something irregular about him because he wasn’t moving his feet. He did not respond when I made a hand ‘OK’, instead he replied with his right arm up signaling them to go ahead of him,” Lapac told Cebu Daily News.

“He was carrying with him his pneumonia and his heart ailment long before but this did not stop him from cave diving. He was admitted for his pneumonia a few weeks ago before his last dive,” said Amores’ wife Luz, a registered nurse.

Luz said her husband had heart problems when he was in his 40s.

Autopsy reports from investigators in Surigao City showed that Amores died from a heart attack.

“His oxygen tank was not empty and there were no signs of struggle. Even when he was suffering, he really practiced all the safety procedures in cave diving he taught to his students and that is the reason he was easily located,” Luz said.

After signaling that he would be the last person out, he was supposed to coil the rope but Amores tied one of his hands to the line so that the strong current would not sweep him away. Lapac tried to save his mentor but he was running out of air.

Amores discovered a passageway in Enchanted River in Hinatuan that led to a bigger chamber and a few more passageways. The passage was named “Doc’s door”. Gastardo, who is now the President of the Filipino Cave Divers, said that every discovery of a path, a door, a crawl or chamber is named after the cave diver who discovered it.

“It was his dream that he’d teach local divers cave diving. It is very expensive to train in Florida and he wanted to give it to local divers for free,” Luz said.

She said she received more pledges from friends in the United States and will turn them over to the Filipino Cave Divers so they can teach more cave divers in the Philippines. Most Filipino cave divers before association’s inception learned through a certification by Paul Nielsen’s IANTC China course.

The Pawod freshwater cave is the most suitable area for training beginners because it has a controlled environment.

Amores was particularly worried about the unregulated development near the Pawod Underwater Cave System and he wanted to work for its protection.

He even wrote a summary brief of Pawod for presentation in the Lapu-Lapu City Council for the creation of the Task Force Pawod.

“Littered inside the cave system are fossils of marine animals ranging from small corals to giant clams. Inside the main chamber are boulder formations that may shed light into the origins of Mactan Island and beyond. Some coral rubble appears to be burnt, the baffling nature of which can generate scientific studies.

However, due to no or little concrete basis for sustainable use of Pawod Underwater Cave System since its discovery in 2011, its condition has been steadily degrading over the years,” Amores said in his project brief.

Read Next
Price wars bad for industry: Hotels, resorts urged to work together to increase the market