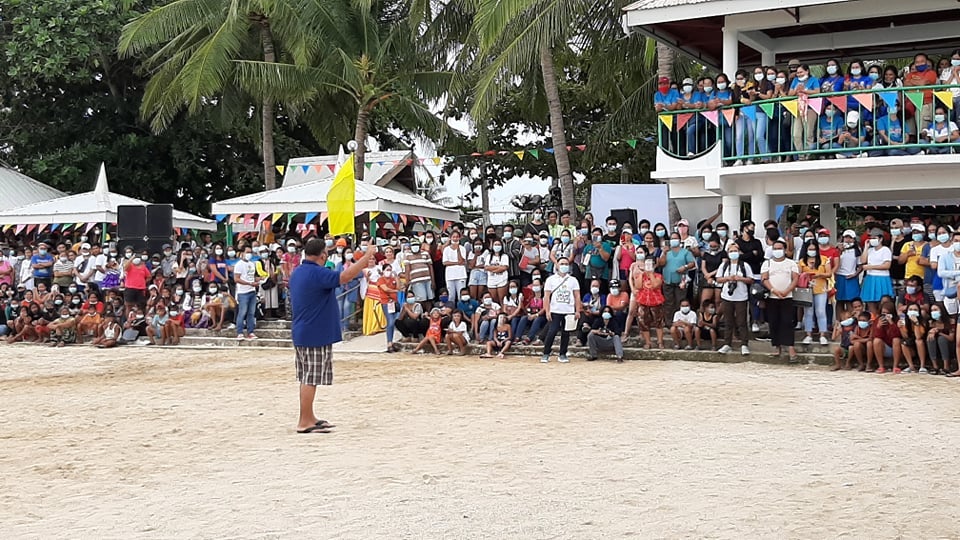 Presidential Spokesperson Harry Roque addresses the packed crowd at Kota Park in Bantayan Island during the second stop of Suroy-Suroy Sugbo on November 27, 2020. The event’s photos and videos drew criticisms from netizens who noticed the violation of social distancing protocols which Roque also pointed out in his speech. |CDN Digital photo by Morexette Marie Erram

BANTAYAN ISLAND, Philippines — Madridejos town in northern Cebu recently made headlines – both in the negative and positive light.

However, the event also drew flak from netizens when social distancing protocols were not strictly implemented, photos and videos of which went viral online.

The crowd in Kota Park, where the activity took place, became uncontrollable and has overwhelmed both organizers and local law enforcers, said Mayor Salvador Dela Fuente.

“We were not able to control the eagerness of our constituents to see personalities, especially from the national government… There were barricades and barriers around the park but most of them still found ways to enter,” said Dela Fuente in Cebuano.

Dela Fuente also confirmed that their local government has advised locals, especially those who attended and witnessed Suroy-Suroy Sugbo last November 27, to do ‘home remedies’ to prevent the transmission of SARS-CoV-2 to other people.

“We understand that most of our constituents do not have the financial capacity to consult a doctor. This is why we encouraged them to do home remedies instead to prevent the virus from spreading,” said Dela Fuente.

“But if they start exhibiting symptoms of the disease, we urge them to immediately consult our municipal doctor so that they will be placed under isolation,” he added.

Nevertheless, the mayor said their town’s health authorities are currently monitoring only one active COVID-19 case.

Madridejos is among the three municipalities that make up Bantayan Island – the other two being Santa Fe and Bantayan.

The event was immediately followed by the kick-off of the three-day Suroy-Suroy Sugbo in the island which is famous for its white beaches and bountiful seafood. /rcg