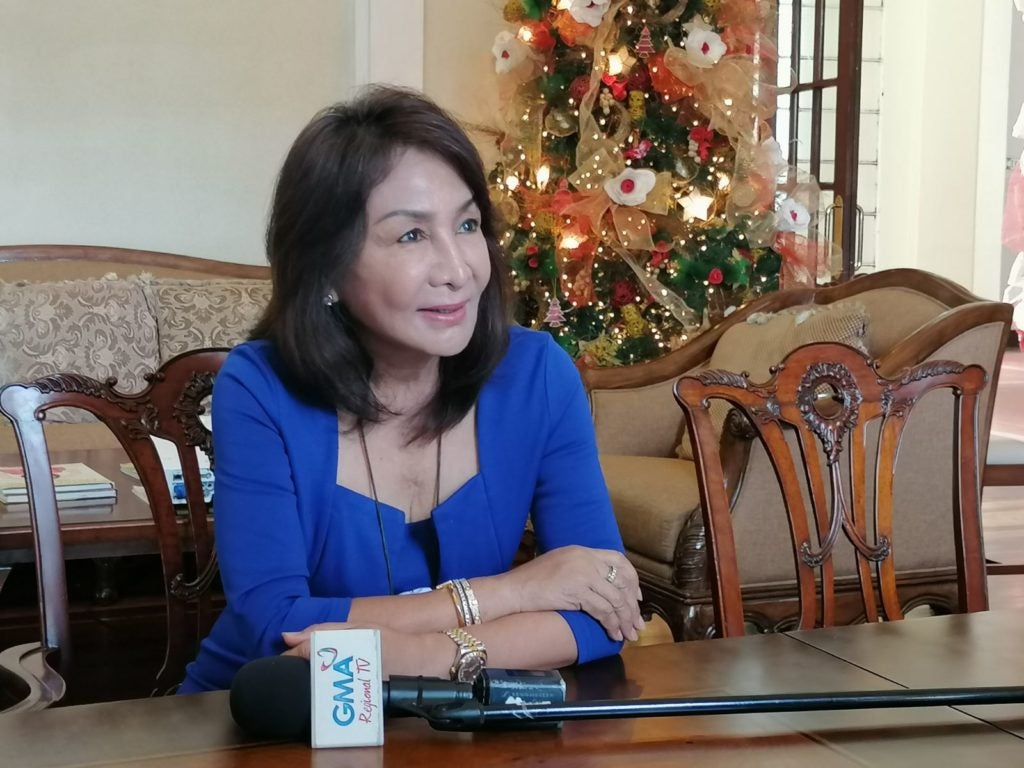 Cebu Gov. Gwendolyn Garcia on the Sandiganbayan’s decision to dismiss graft cases filed against her in relation to the purchase of the Balili property: “I feel vindicated but as I’m just happy for my family for they, too, are vindicated. I’m also happy for the other seven which were cleared.” | CDN Digital Photo by Morexette Marie Erram

CEBU CITY, Philippines – Cebu Governor Gwendolyn was all-smiles when she faced the press on Wednesday, December 2 to give her comments on the Sandiganbayan’s decision that dismissed graft cases filed against her in relation to the purchase of the controversial Balili property.

“I feel vindicated but I’m also just as happy for my family for they, too, are vindicated,” Garcia told reporters at a press conference on Wednesday.

In a decision promulgated last November 26, the anti-graft court said the prosecution failed to prove graft was committed by Garcia and seven public officials accused in the purchase of the lot owned by the Balili family in Naga City, Cebu province.

READ MORE: Graft case vs Garcia, others for P98.9M purchase of land mostly under water dismissed

This developed after the defense filed a demurrer to evidence, effectively questioning the evidence the prosecution presented before the court.

The owners of the property, Romeo and Amparo Balili, were also cleared.

The case against Garcia and the others stemmed from the province’s purchase of 11 parcels of land with a total area of 24.9 hectares for P98.9 million from the Balili family in 2008.

The decision to clear Garcia and the rest of the accused, according to the Sandiganbayan ruling, was made after “a thorough consideration of the evidence adduced by the prosecution.”

It said the court was convinced “that the guilt of the accused has not been proven with the required quantum or proof at this stage of the proceedings.”

“There being no sufficient basis to sustain the indictments, the court is left with no choice but to dismiss the case,” said the ruling penned by Associate Justice Lorifel Pahimna.

Garcia, for her part, said the ruling was a relief not only for her but also to her family and the other public officials named as respondents in the case.

Aside from Garcia and the Balilis, also charged with graft but cleared in the case were:

Except for the Balilis, Garcia and the others accused had been found guilty of grave misconduct by the Office of the Ombudsman, ordered dismissed from service and barred from holding public office.

But the Court of Appeals nullified the Ombudsman’s decision, saying the graft prosecuting office acted “whimsically, capriciously and arbitrarily.”

It said the administrative case against Garcia should fall under the so-called Aguinaldo Doctrine when Garcia was reelected governor in 2010.

The Aguinaldo Doctrine spares a public official from administrative liability for acts committed in a previous term of office if the official had been reelected. In effect, Garcia’s reelection in 2010 got her off the hook.

Garcia, a member of one of the most powerful political clans in Cebu, served as Cebu governor from 2004 to 2013—the first woman to hold that office. She was elected representative of Cebu’s third congressional district in 2013 and 2016. /rcg

Read Next
Gadgets that make great presents this Christmas