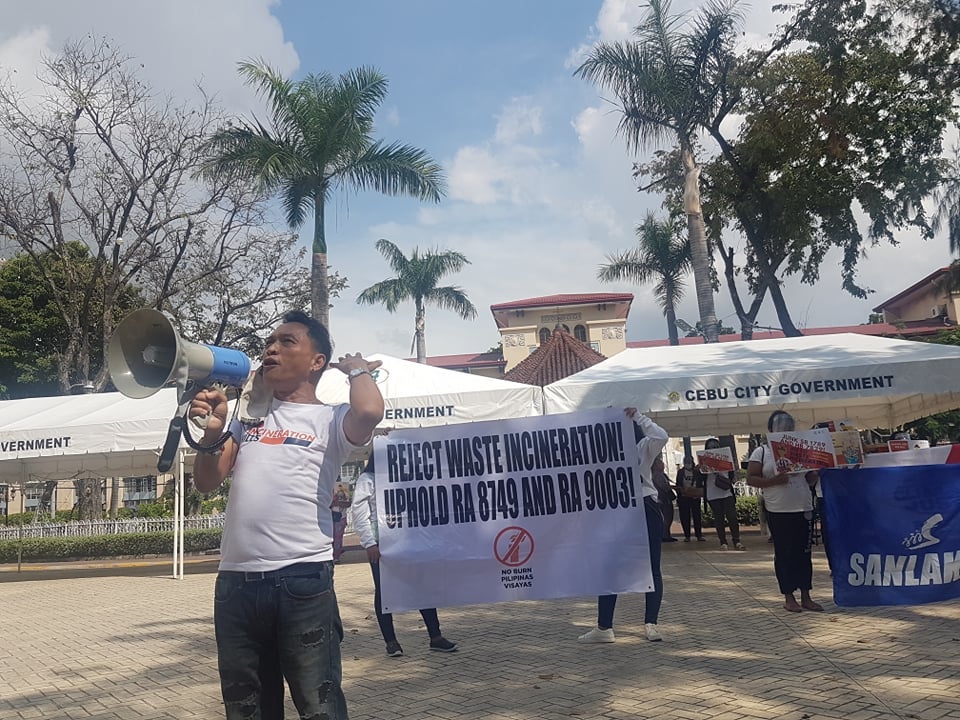 No Burn Pilipinas holds a protest rally outside the Cebu City Hall, calling for a stop to the proposed waste-to-energy incineration project of the city. CDN Digital photo | Delta Letigio

No Burn Pilipinas, a coalition of environmental groups in the country, held a 10-minute rally in front of the Cebu City Legislative Building on Wednesday, December 9, 2020, for the National Day of Action on Climate Energy being celebrated nationwide.

According to Teody Navea of No Burn Pilipinas, the proposal of New Sky Energy Philippines will put to risk the lives, livelihood, and the health of residents in Cebu.

He said that WTE incineration should not be associated with climate or sustainable solution to the garbage problem, which persists in the city because it lacks an operational landfill.

“The incineration of one metric ton (Mt) of municipal waste in municipal-level incinerators is associated with the production/released of about 0.7 to 1.2 Mt of Carbon Dioxide (CO2). The Center for International Environmental Law (CIEL) estimates that about 2.9 Mt of CO2 is released into the atmosphere when 1 Mt of plastic packaging is incinerated,” said No Burn Pilipinas in a statement.

The group is hoping that the city government will reconsider its stand on the proposal of New Sky Energy for a WTE incineration facility and find other sustainable means to solve the garbage problem.

Navea added that if the city would resort to WTE incineration, the consequences may be irreversible.

Aside from WTE Incineration, the group also urged the city government to stop conducting trials for burning solid waste inside their facility in Barangay Binaliw. The group claims that the facility is violating the Philippine Clean Air Act for conducting these trials.

(We only want the people to know what is happening at Binaliw. They even said a water treatment facility will be built for septic tanks. The people of Binaliw will be the ones who will suffer for this.)

No Burn Pilipinas Coalition is hoping that Mayor Edgardo Labella would respond to their appeal and choose a sustainabe path for Cebu City.

Read Next
Record hunger in the Philippines as Covid restrictions bite