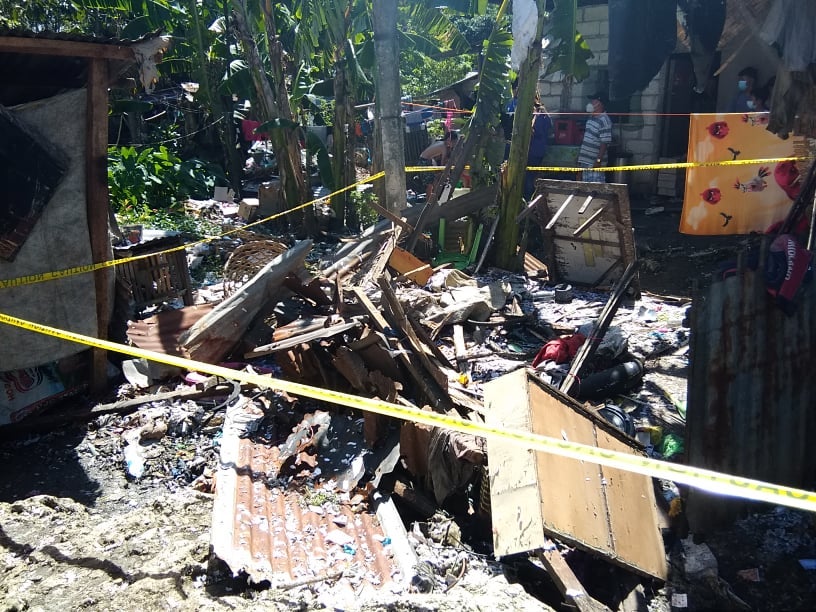 This is what is left of the house of the Dico family after the firecracker explosion on December 10 in Barangay Babag, Lapu-Lapu City. The explosion caused the death of a 13-year-old boy, who suffered a head injury due to the blast. | Futch Anthony Inso

LAPU-LAPU CITY, Philippines — A 13-year-old boy, who got injured due to an explosion of firecrackers on Thursday night, December 10, 2020, in Sitio Shooting Star, Barangay Babag, Lapu-Lapu City, has died.

This was confirmed by Nagiel Bañacia, head of the Disaster Risk Reduction and Management Office in Lapu-Lapu City.

Bañacia identified the victim as Jumar Dico, who sustained a fracture on his head due to the explosion.

The victim was rushed to Lapu-Lapu City Hospital but was later pronounced dead by doctors at the hospital.

He added that the 31-year-old mother, Marivic Dico, and 15-year-old daughter, Mary Jane Dico, who suffered second and third-degree burns due to the explosion, were already out of danger.

Based on their investigation, Bañacia said that the mother was making a Judas Belt when suddenly the firecracker sparked while she was tying them together.

Marivic’s sister, Guadalupe Dico delos Santos, told CDN Digital that this was the first time that her sister had engaged in illegal firecracker manufacturing.

(Her husband worked as a construction laborer, but due to COVID, the construction work was stopped. So what did the family do because they are poor? They decided to manufacture firecrackers for the Christmas season. But instead this happened.)

She said that before the incident, the family was about to have their dinner and that Jumar just got home from the internet cafe./dbs