Bloodied Giannis, emotional Towns back on court for NBA preseason 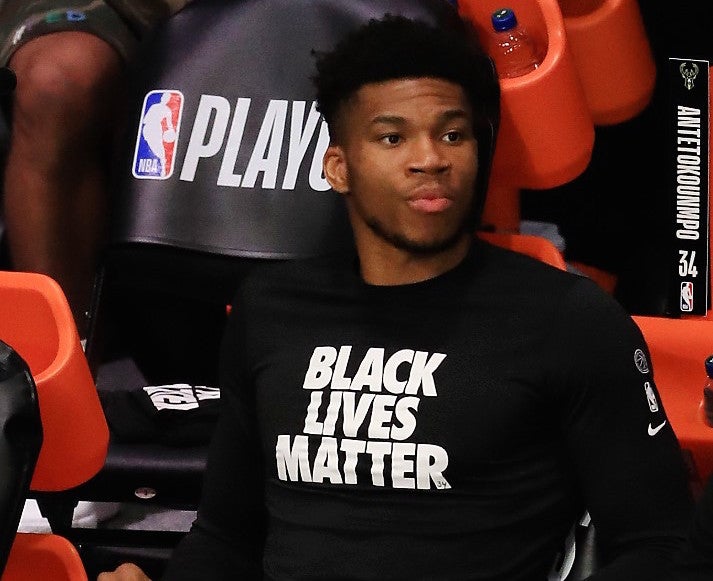 FILE – Giannis Antetokounmpo #34 of the Milwaukee Bucks on the sidelines during the fourth quarter against the Miami Heat in Game Five of the Eastern Conference Second Round during the 2020 NBA Playoffs at The Field House at the ESPN Wide World Of Sports Complex on September 08, 2020 in Lake Buena Vista, Florida. Mike Ehrmann/Getty Images/AFP

Giannis Antetokounmpo, bloodied from a cruel elbow blow, finished with 25 points and Karl-Anthony Towns welcomed a respite from a COVID-19 family tragedy as 14 NBA teams embarked on their first preseason games Saturday.

Clubs are fine-tuning their rosters as veterans work on their roles and rookies seek to show they can contribute with the new NBA season less than two weeks away.

Just under two months have passed since the Los Angeles Lakers won their 17th NBA title making it the shortest off-season in league history for some teams.

But for the eight teams who did not make it to the post coronavirus shutdown games inside a bubble in Orlando, Florida, it has been the longest layoff since the 1998 labor lockout.

The Minnesota Timberwolves were one of those eight and their grief-stricken center Towns was in tears during the pre-games ceremonies after taking to the floor for the first time since losing seven relatives, including his mother, to Covid-19.

The NBA halted its season in March due to the global pandemic and Towns’ mother died soon after in April.

As the players and coaches were introduced in the empty arena, Towns sat on the bench with his face buried in a towel. Teammates came over to comfort Towns as he wiped away the tears.

Towns delivered 13 points and eight rebounds in 22 minutes for the T-Wolves and his sidekick D’Angelo Russell also looked impressive with a team-high 14 points in a 107-105 loss to Memphis.

First overall pick Anthony Edwards came off the bench to score five points in 26 minutes in the loss.

In the Milwaukee Bucks’ preseason opener, Antetokounmpo was bloodied by an accidental elbow to the face early in the game but it didn’t stop him from scoring a game-high 25 points in the Bucks 112-102 loss to Luka Doncic’s Dallas Mavericks.

Antetokounmpo, who the Bucks hope to sign to a contract extension before next week’s deadline, went to the dressing room for repairs but didn’t stay long.

“I got back to the locker room and the doctor checked my eye,” said Antetokounmpo. “I didn’t want to play just two minutes and sit the rest out. I decided to go out and compete because it was the first game.”

Elsewhere, two-time MVP Stephen Curry and the Golden State Warriors also hit the floor for the first time since the March stoppage.

Curry will have his hands full this season trying to lead the Warriors back to the top rung of the NBA’s Western Conference.

The league’s premier shooter, who played just five games last season due to a broken hand, scored 10 points and had three assists as the Warriors edged the Denver Nuggets 107-105.

Curry’s task was made that much harder when the team learned recently that Klay Thompson would miss the season with a torn right Achilles tendon.

Thompson also missed all of the 2019-20 NBA season after tearing the ACL in his left knee in the 2019 playoffs.