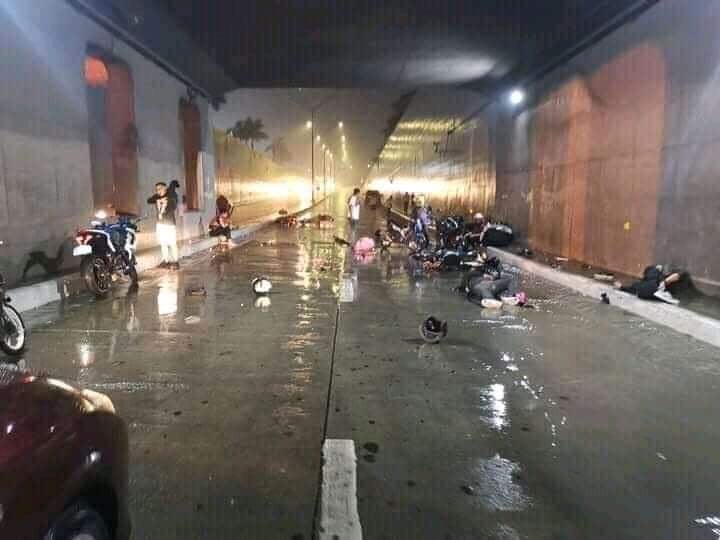 This is the accident scene at the southbound lane of the SRP tunnel. One died while seven were injured when a SUV rammed into parked motorcycles with riders who were taking shelter from the heavy rain late Thursday night, December 10, 2020. | Photo from Cebu Ni Bai

CEBU CITY, Philippines — The Cebu City Disaster Risk Reduction and Management Office (CDRRMO) has formed a squad to patrol the South Road Properties (SRP) tunnel to ensure that no individual will be loitering in the tunnel anytime of the day.

This was one of the measures the CDRRMO has taken following the death of a woman and injury of seven others in a tragic accident last December 10, 2020.

CDRRMO head Ramil Ayuman said that the squad will be made up of five personnel doing three shifts per day. Their job is to monitor the tunnel for any foot traffic.

People are not allowed to loiter or even walk into the tunnel, save for authorized personnel, as the area is an expressway where vehicles can move as fast as 60 kilometers per hour (kph).

In the incident last December 11, motorcycle riders stopped in the end of the tunnel exiting the southbound lane to seek shelter from the rain. A SUV speeding through the tunnel crashed into these motorcycles, causing one death and several injuries to the riders.

(This is the reason why we formed a squad to monitor the people suddenly going into the tunnel. We will apprehend them because it is dangerous.)

Ayuman said they are also is also working with the SRP Management for the putting up of signages at entrances and exits in the tunnel to remind the public not to stay or enter the tunnel on foot.

Read: CDRRMO to put up signages at SRP tunnel to avoid fatal accidents

During rainy days, the patrolling of the tunnel will be intensified to avoid a similar tragic incident to happen again.

The CDRRMO hopes that the public will not risk their lives for a few sheltered moments under the tunnel as rushing vehicles can be more dangerous than rainwater.