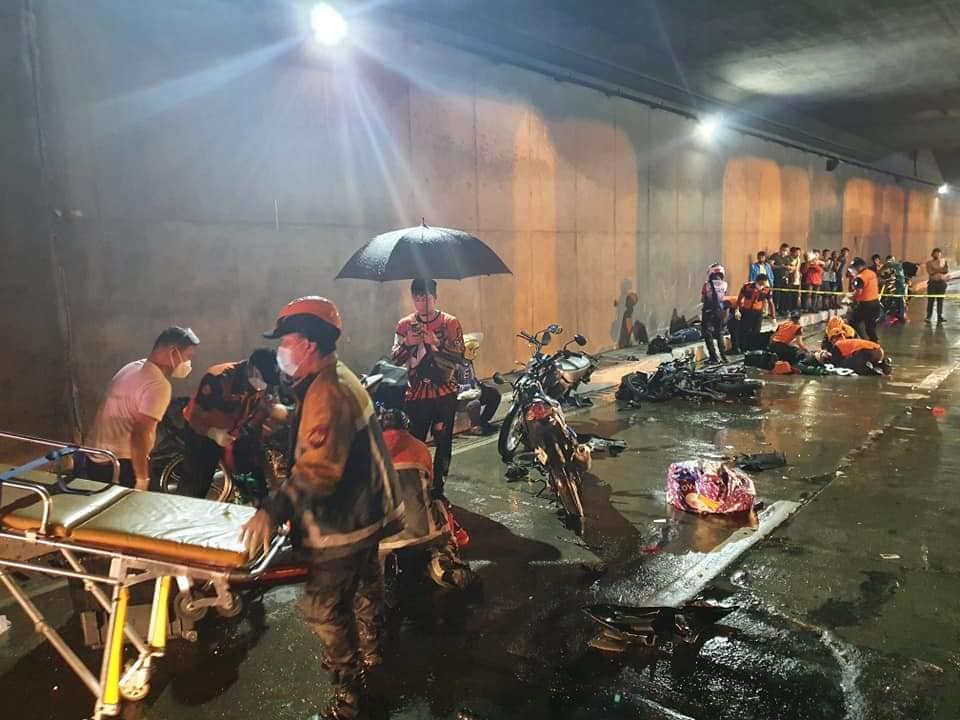 This is the scene of the vehicular accident at the SRP tunnel that took the life of a woman on Thursday evening, December 10, 2020. | Photo Courtesy of CDRRMO

CEBU CITY, Philippines — The death of a woman and injury of seven other motorcycle riders taking shelter from the rain at the South Road Properties (SRP) tunnel on Thursday evening, December 10, 2020, drew the concern of the Cebu City Disaster Risk Reduction and Management Office (CDRRMO).

CDRRMO head Ramil Ayuman said the incident has drawn to light the danger of people or riders staying in the tunnel, especially during rains, because the road is an expressway and vehicles usually travel at high speeds.

In Thursday’s accident, 19-year-old Tareq Leleng Farhat, the driver of the SUV involved, said that when he saw the motorcycles parked near the end of the tunnel, he hit the brakes but this didn’t help as the vehicle behind him rear-ended him, causing him to lose control of the vehicle.

The investigation continues as to whether Farhat will be held responsible for the accident, especially since a woman died.

For Ayuman, the next thing to do now is to make sure accidents like this won’t happen again.

The CDRRMO will be conducting a dialogue with the SRP Management, the traffic police of the stations with the jurisdiction of the SRP, and the Cebu City Traffic Office (CCTO), to discuss on how to avoid accidents like this from happening again.

(We have decided to place signages at the SRP to remind people not to loiter around there. It is risky and we understand if the vehicles would run at a certain speed because it is an expressway.)

CDRRMO also reminded vehicles passing through the SRP to remain vigilant and maintain a safe speed, especially when entering the tunnel, where visibility may be a challenge.

For now, the CDRRMO will allow the police to conduct the necessary investigation, while they focus on putting up mitigating measures against similar incidents.

Ayuman also urged the public to avoid seeking shelter at the SRP tunnel as this can be a dangerous place for people on foot and parked vehicles.