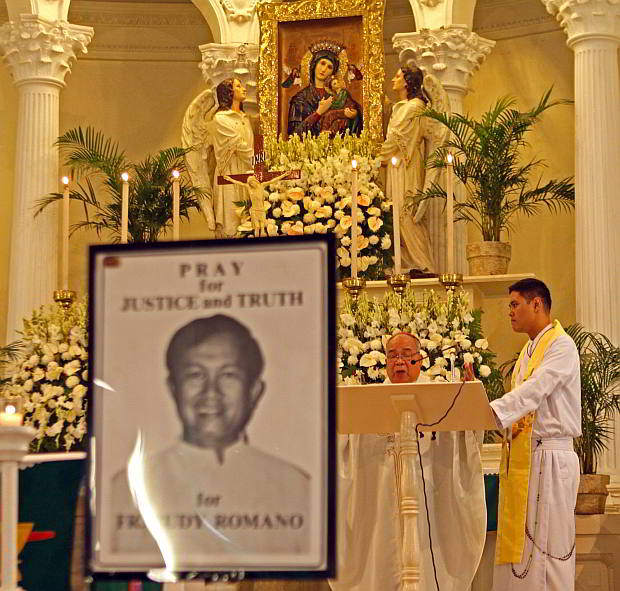 A mass will be held this afternoon at the Redemptorist church to remember Fr. Rudy Romano who was abducted in Labangon, Cebu city during Martial Law. (CDN FILE PHOTO)

The Redemptorist missionary priest was a popular advocate for protecting the poor and led the campaign against human rights abuses during the reign of President Ferdinand Marcos.

At 5:30 p.m. today, a memorial for Fr. Romano will be held at the Redemptorist Chuch in Cebu City. He would have celebrated the 50th anniversary of his ordination to the priesthood.

Romano was a known leader of the anti-Marcos movement in Cebu. He was vice-president for the Visayas of the Bagong Alyansang Makabayan (Bayan).

Social inequality
Cebu Archbishop Jose Palma urged Cebuanos to perpetuate Romano’s memory by continuing what the priest fought for. Palma said Romano took the side of the poor while denouncing injustice and social inequality.

“In our country today, we are continuously confronted with all kinds of social and ecological problems. Corruption has contributed to the persistence of poverty affecting many of our people,” read the prelate’s statement to the press.

“In Cebu, we see glaring indicators of poverty. We see thousands begging in the streets. There are vendors everywhere due to high unemployment. Countless informal settlers are being ejected from their abodes. Workers continue to demand higher wages but their cries are not heard. Farmers and fisherfolk continue to live in abject poverty,” he added.

Palma encouraged the people to emulate Romano, who despite all odds, stood up for what was right for the common people.

“Following in the footsteps of our Lord, Fr. Rudy also bore his own cross until the end when he offered his life to follow Jesus. His life, his living out his vocation as a pastor and his legacy of deep commitment to Gospel values are gifts he offers to us until today even if he is longer with us,” the archbishop said.

The Cebu City government installed a marker in barangay Labangon where Romano was abducted. The Cebu provincial government also passed a resolution “adopting Fr. Romano as a son of the province of Cebu” since the priest promoted human rights and rendered concrete assistance and social service to less-privileged Cebuanos.”

A native of Samar, Romano helped make Cebu a bastion of the people’s fight for freedom and justice during the dark years of the Marcos dictatorship.

Paul Rodriguez, leader of a militant group who had rubbed elbows with Romano, said they  only considered Romano as “missing” for many years but now, the day marks “as his death anniversary already.”

This morning, they will visit the marker in Labangon where Romano was abducted.

Amost 30 years since Romano disappeared, his advocacies like social justice and social reform remain elusive, said Rodriguez. The country doesn’t even have genuine elections because money still matters, he added.

“Timely pud kaayo in the issue of the pork barrel which I think Fr. Rudy would have been strongly against if he was still alive,” he said.

The annual commemoration of Romano’s disappearance has served as a venue for anti-Martial personalities to gather and give testimonies on his life.