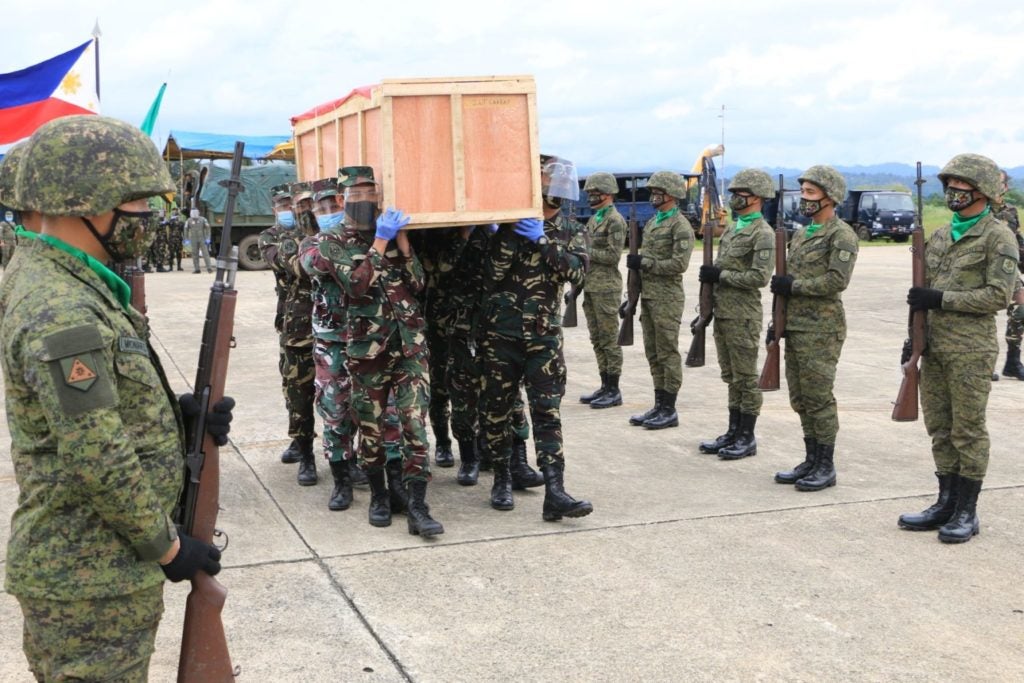 At the Lumbia airport, the Philippine Army’s 4th Infantry Division and the Philippine Air Force’s Tactical Operations Group render military honors to the pilot and crew of UH-1H helicopter that crashed in Impasug-ong, Bukidnon on Jan. 16. The bodies were airlifted to a PAF airbase in Cebu on Sunday. Separate honors were rendered to the Army and CAA who perished in the same incident. CONTRIBUTED PHOTO BY the 4th Infantry Division

CAGAYAN DE ORO CITY – The bodies of the military personnel who were killed in a helicopter crash on Saturday in Bukidnon are being brought back home to their families, a Phil. Army official said Sunday, Jan. 17.

Maj. Rodulfo Cordero Jr., the spokesperson of the Army’s 4th Infantry Division, said the remains of the four members of the Phil. Air Force (PAF) were airlifted to their respective families in Luzon.

The C-295 cargo plane that brought the bodies then made an overnight stop at the 205th Tactical Helicopter Wing, the PAF headquarters in Mactan-Benito Ebuen Air Base in Cebu, where they would be given military honors, Cordero said.

The four-man crew of the UH-1H helicopter and three Army personnel all died when the aircraft crashed in Sitio Nahigit, Barangay Bulonay, Impasug-ong town, Bukidnon.

Arroyo, Caabay, Bersabe, and Agarrado were PAF personnel, Salvado was from the Army, and Ayocdo and Sugalang were members of the Army’s Cafgu Active Auxiliaries.

Coordero said the helicopter came from the 403rd Infantry Brigade headquarters in Malaybalay City and was on its way to a remote army base patrol in Impasug-ong near Bukidnon’s boundary with Agusan del Sur to bring provisions when it crashed.

Cordero said there were actually two helicopters flying in convoy en route to their destination.

The helicopters belonged to the PAF’s 205th Tactical Helicopter Wing in Cebu, with the Tactical Operations Group-10 based in Barangay Lumbia here as the controlling unit.

Cordero said it was unlikely that the chopper was shot down by communist guerrillas as military helicopters fly at an altitude of about 800 meters, beyond the range of assault rifles, Cordero said.

An M-16 rifle, for instance, has an effective range of only 460 meters, he added.

Cordero said the wreckage of the crashed helicopter was being guarded by soldiers from the 8th Infantry Battalion until experts from the PAF could finish its investigation into the cause of the crash.