Retired Army Colonel tagged in killing of Cebu lawyer, wounding of another lawyer 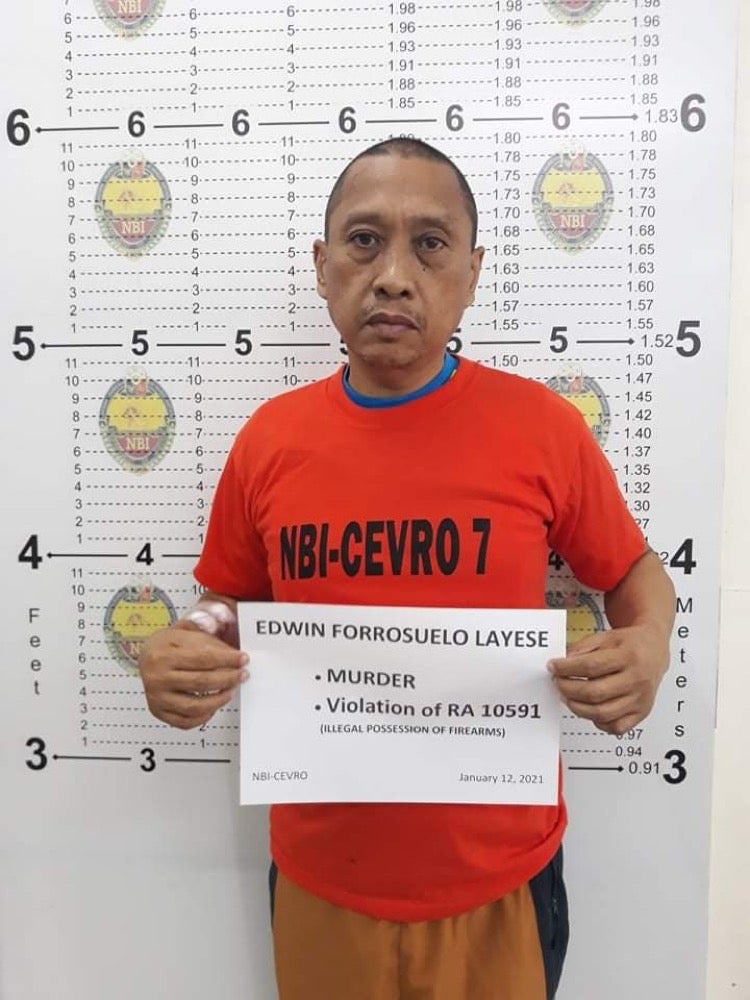 Retired Colonel Edwin Layese is accused of being involved in the killing of Lawyer Joey Luis Wee last November and the wounding of  Lawyer Joseph James Gupana last October.  |Photo courtesy of NBI-7

CEBU CITY, Philippines – Another retired Philippine Army official was arrested for his alleged involvement in the killing of a lawyer in Cebu City.

Lawyer Renan Augustus Oliva, director of NBI-7, told reporters in a press conference on Monday, January 18, that they found out that Layese also happened to be part of a separate shooting incident involving another lawyer – Joseph James Gupana.

“While we were conducting the investigation, we found similarities in the execution and profiles involved in the two attacks,” said Oliva in a mix of Cebuano and English.

Layese was arrested within the vicinity of Fuente Osmeña last January 13, 2021, NBI-7 said. He will be facing charges of murder and illegal possession of firearms.

He worked as the chief of security in one of Cebu City’s business districts, and formerly served as regional directors for the Philippine Drug Enforcement Agency (PDEA) in some areas in Mindanao, and in Western Visayas.

Layese was also a graduate of the Philippine Military Academy, Class Bantay Laya of 1994.

Authorities earlier arrested another retired official from the Philippine Army, identified as Edgar Benigno Fausto Peralta, for the killing of Wee.

Wee, 51, was shot in the head in front of his law office in Barangay Kasambagan, Cebu City last November 23, 2020.

Gupana, 74, on the other hand, survived an ambush-slay attempt in Barangay Pajac, Lapu-Lapu City last October 10, 2020.

Oliva said they believed Layese and Peralta were moonlighting as guns-for-hire.

However, investigators are still determining the identity of the mastermind responsible for Wee’s killing.

While Layese was linked to both incidents involving lawyers as victims, agents from NBI-7, however, said the motives in each crime differed from one another.

RELATED STORY: 2 lawyers shot in Cebu in less than 2 months

NBI-7 said Peralta, with the assistance of lawyers from the Integrated Bar of the Philippines in Cebu (IBP-Cebu), recently executed an extra-judicial confession, tagging Layese in Wee’s death.

“We not only have testimonial but also documentary and electronic evidence to show that Edwin Layese was involved. Not just a participant but a supervisor in the killing of Wee,” said Oliva.

Lawyer Wenceslao Galendez Jr., special investigator from NBI-7, also said they confirmed Layese’s identity when they secured evidence that he owned a blue Toyota Hilux pick-up truck spotted within the area where Wee was shot dead.

As a result, Galendez said the pick-up truck was then the subject of a search warrant issued by Branch 13 of the Regional Trial Court in Cebu City.

“The arrest was made under hot pursuit. It just so happened that when we served the search warrant against the vehicle, he was driving it,” explained Galendez.

Investigators said Peralta admitted that he and Layese have accepted a six-digit payment to kill Wee. The exact amount, however, was not disclosed.

They added that the former PDEA executive, as ‘supervisor in the killing of Wee’, was tasked with planning and carrying out the crime.

Layese’s camp, on the other hand, requested not to issue any comments on the case as of the moment.

“My client has the right to be proven innocent until proven otherwise so as of this moment, we will not give any comment, we will face charges in due time,” said Lawyer John Raphael Pelinggon, Layese’s legal counsel. /dbs