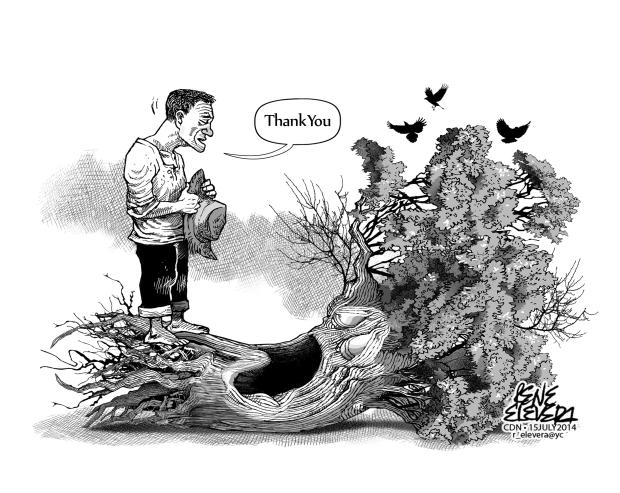 The collapse of a nearly century-old giant acacia tree in  San Fernando town, southern Cebu is a painful reminder of how time, abuse and neglect can  erode a  magnificent living tower  and cause harm to whoever is in its path.

The fallen tree in barangay Balod tied up traffic on the national highway for at least four hours, vehicle congestion that stretched for several kilometers last week.

This also gave some contractors and  the Department of Public Works and Highways (DPWH) reason to renew their argument to immediately cut down remaining roadside trees even without clearance from the Department of Environment and Natural Resources (DENR).

Mirasol Bartido who lives next to the tree scrambled out as it fell, dragging  her daughter  to safety.  The tree fell on a passing delivery truck and injured one passenger.

Don’t be so fast with the chainsaw.

Let  common sense and science determine the next move.

An inventory is in order to determine exactly which of the trees are decaying and unsafe, and which should remain to provide a green canopy, shade, oxygen, comfort and tourism-worthy beauty for passing motorists,  visitors and residents alike.

The fallen acacia should not justify another binge of  indiscriminate cutting of trees by contractors or DPWH personnel eager to meet deadlines for road development projects.

If anything, it provides further impetus for local government units  to take better care of these trees to ensure that they won’t collapse without warning on  hapless residents  or passersby.

The DENR said the collapse of  century-old trees is due to several factors.

Aside from age and decay, there’s the disturbance caused by vehicle vibrations, road construction, and even the burning of leaves beneath it by residents, and the smoke which eventually erodes its trunk.

Another culprit is the use of nails driven into the bark to  hang streamers or posters of candidates during election season.

(What happened, by the way, to complaints filed against candidates who defaced trees this way in the last election, a campaign done by  environmental groups like the Philippine  Earth Justice Center have teamed up with the Commission on Elections?

The Cebu provincial government would do well to  create its own team to look after the welfare of these  aging trees that are part of the heritage and rural charm of southern Cebu.