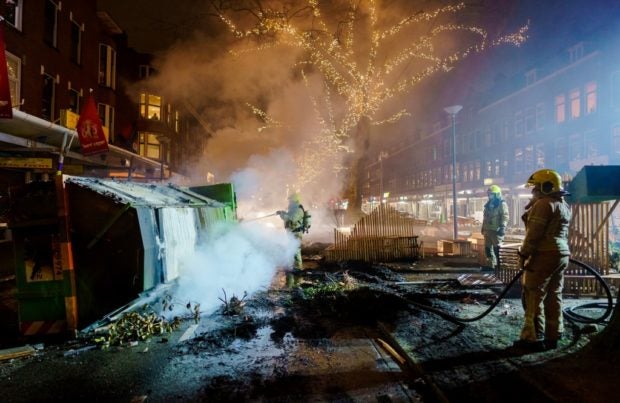 Firefighters work to extinguish a fire on the Groene Hilledijk in Rotterdam, on January 25, 2021, after a second wave of riots in the Netherlands following the introduction of a coronavirus curfew over the weekend. – Riot police clashed with groups of protesters in Amsterdam as well as the port city of Rotterdam, Amersfoort in the east, and the small southern city of Geleen near Maastricht, police and Dutch news reports said. (Photo by Marco de Swart / ANP / AFP) / Netherlands OUT

THE HAGUE — The Netherlands was hit by a second wave of riots Monday evening, as  protesters again went on the rampage in several cities following the introduction of a coronavirus curfew over the weekend.

Riot police clashed with groups of protesters in Amsterdam as well as the port city of Rotterdam, where people smashed shop windows and ransacked their supplies.

The unrest also hit Amersfoort in the east, the small southern city of Geleen near Maastricht, The Hague and Den Bosch, police and news reports said.

More than 70 people had been rounded up by 2200 GMT, public newscaster NOS reported.

Geleen police said in an earlier tweet that they were dealing with “rioting youths who are throwing fireworks”.

In Rotterdam, police used a water cannon after clashing with the protesters, the NOS said.

“There is an urgent request to all to leave the area,” the city council said on Twitter.

Images on social media showed rioters looting a shop in Den Bosch and a press photographer being hit in the head in Haarlem, after an angry mob chased him off and threw a brick at him.

Earlier Prime Minister Mark Rutte had condemned what he called the “criminal violence” of the previous night, which police officials described as the “worst rioting in 40 years”.

Police arrested around 250 people after using water cannon and tear gas during demonstrations in Amsterdam, Eindhoven and other towns on Sunday, local media said.

“It’s unacceptable. All normal people will regard this with horror,” Rutte told reporters.

“What motivated these people has nothing to do with protesting, it’s criminal violence and we will treat it as such.”

In Eindhoven, where business were looted and a car torched, mayor John Jorritsma likened the situation to “civil war” and called for the army to be sent in.

And Rutte condemned the “idiots” who pelted a hospital in the town of Enschede with stones.

Exemptions are allowed, for example for people having to work, attend funerals or walk their dogs, on condition that they present a certificate.

The Netherlands was already under its toughest measures since the start of the pandemic, with bars and restaurants having closed in October, and schools and non-essential shops shut since December.

More than 13,500 people have died in the Netherlands since the start of the Covid-19 pandemic.

While the rate of new infections has been slowing, growing fears over new, more infectious strains of the virus prompted the government to announce the curfew.

“I hope it was a one-off, but I’m afraid it could be a harbinger for the days and weeks to come,” Simmers said.