Increase in prices of pork due to ASF ban — DVMF 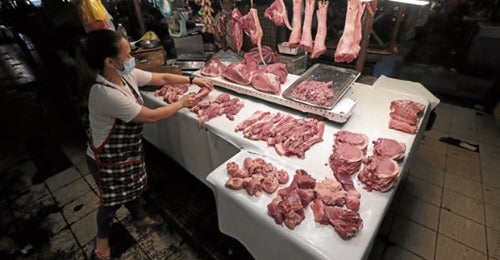 CEBU CITY, Philippines — The pork ban on African Swine Fever (ASF)-hit provinces, disallowing them to deliver pork products to Cebu, is the main reason why a price increase of pork has been noticed in the Carbon Market and other markets in Cebu City.

DVMF head, Doctor Jennifer Laurente, said in a phone conference, that there has been a significant drop in pork supply in Cebu City because the supply from Negros Oriental has been cut off.

The neighboring province is now directly supplying Luzon, which has a worse pork shortage situation compared to Cebu City.

This means that only Cebu Province is supplying pork to the markets in Cebu City. The city does not have its own steady supply of pork being most highly urbanized.

The ASF ban has been intensified with the recent reports that the hog disease has reached Region 8. The city government is already drafting changes in the entry of pork to include Region 8, although as of now the city is not accepting pork products from other provinces anyway.

Laurente noted that Cebu City is not the only local government unit (LGU) with decreased pork supply as the ASF ban has caused a general shortage of pork in the country.

Still, there is a steady supply of pork even if it is significantly decreased compared to when there was no ASF ban yet.

The DVMF did not call for a shortage in pork supply in the city but attributed the decreased supply to the rising prices of the products in the market.

As for the rise in price for poultry products, Laurente said this may only be due to the season. The city sources its poultry mostly from Naga City and other towns as well.

There may not be enough chickens to slaughter yet after the high demand during the holidays.

She added that the supply of poultry will increase when the chickens are ready for harvest. /rcg