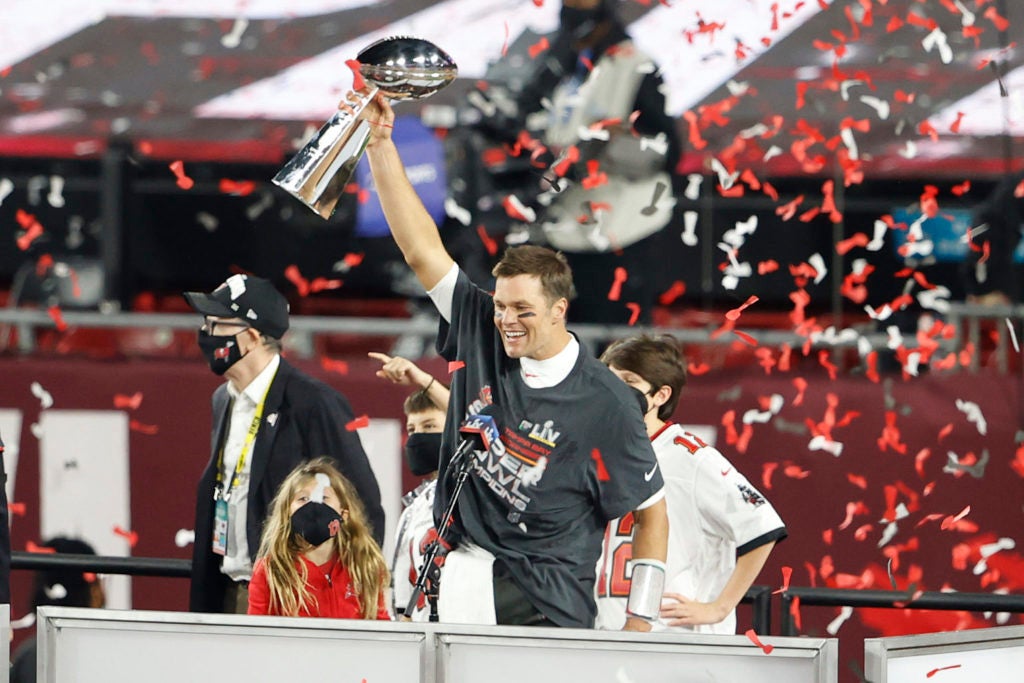 The 43-year-old Buccaneers quarterback confounded the odds once more by leading Tampa Bay to a 31-9 victory less than a year after ending his two-decade career with the New England Patriots.

The win, which came 19 years after Brady’s first Super Bowl triumph with the Patriots in 2002, has been hailed as the quarterback’s greatest achievement.

HOW 'BOUT THAT?! #GoBucs pic.twitter.com/VMeX3PhCOl

But Brady was merely content to look back on what he called an “amazing” season.

“They’re all special in they’re own way,” Brady said of his Super Bowl wins.

“It’s been an amazing year. Just really proud of all the guys, all the coaches, the effort we put in.

“We knew we were playing a great football team tonight and we got the job done. If you get this far you’ve got to get the job done.”

The Bucs’ victory capped a remarkable run through the playoffs which saw the team account for three of the game’s greatest quarterbacks in consecutive games.

A road victory over Drew Brees and the New Orleans Saints last month was followed by an NFC Championship defeat of Aaron Rodgers and the Green Bay Packers at Lambeau Field.

Brady saluted the work of the Bucs defense, which on Sunday shut down Patrick Mahomes and restricted the Chiefs to just nine points.

“They stepped up to the challenge,” Brady said. “You go up against a guy like Pat, an incredible player, Aaron (Rodgers) two weeks ago, the MVP, they played incredible. Before that against Drew (Brees) they played great.

“They stepped up and rose to the occasion against extremely talented offenses. Just so happy they all came to play tonight.”

Brady had been instrumental in persuading former Patriots stalwart Gronkowski to come out of retirement to join him in Florida, and also lobbied the team to make a move for free agent Brown.

“Big-time players making big-time plays,” Brady said. “Great to see what they did, what they added to the team. Gronk’s an unbelievable player, teammate, talent, work ethic, commitment.

“And AB (Antonio Brown), since he got here he’s just done everything the right way.”