Chan to ban sale of liquor in Lapu-Lapu City 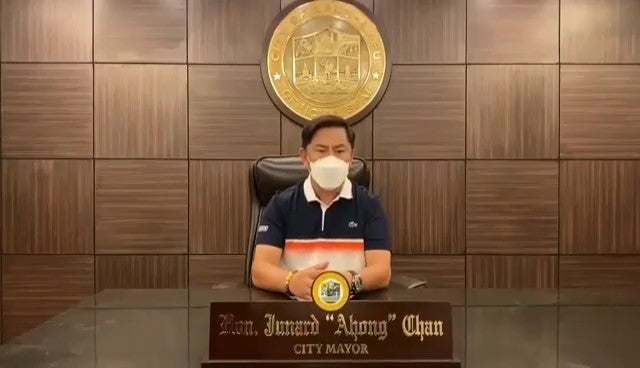 Lapu-Lapu City Mayor Junard “Ahong” Chan has ordered a ban on the sale of alcohol in his city. | Photo courtesy of Lapu-Lapu City PIO

Chan said that the measure is necessary to avoid mass gathering and to prevent the spread of Coronavirus Disease 2019 (COVID-19).

Aside from a city-wide liquor ban, Chan will also order the temporary closure of karaoke and videoke bars.

He revealed that he came up with the decision after meeting with representatives from the cities of Cebu and Mandaue, together with the Department of Health (DOH)-7, Office of the Presidential Assistant for the Visayas (OPAV), and National Inter-Agency Task Force (NIATF) chief implementer for the Visayas General Mel Feliciano on Friday morning, February 19, 2021.

“We have another round of meeting with the tri-cities because we are planning to issue an executive order, a uniform executive order, like temporarily banning the of liquors and karaoke bars,” Chan said, adding that this is due to the rising COVID-19 cases in Cebu.

Chan also said that starting tonight, they will strictly implement again the city’s curfew from 10:00 pm to 5:00 am, the quarantine pass, and the number coding for vehicles to lessen the movement of the public.

The mayor also asked the Philippine National Police (PNP) to intensify their police visibility and the apprehension of health and safety protocol violators, such as the non-wearing of a face mask, face shield, and the non-observance of social distancing.

This is also necessary after the DOH-7 has discovered two new mutations of potential clinical significance of the Sars-Cov-2 virus. /rcg