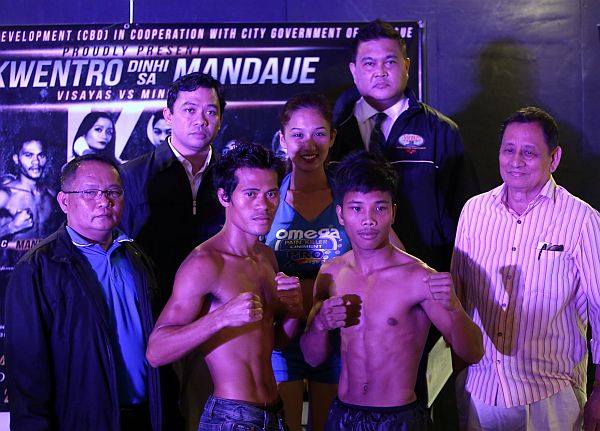 Vic Saludar (2nd from left) poses with his opponent Toto Landero in one of his fights in Cebu in 2017. | CDN FILE PHOTO

Both Mindanaoan boxers went on toe-to-toe for 12 rounds, with the judges scoring the bout via a split decision favouring Saludar. Saludar earned the nods from judges Aquil Tamano who scored the bout at 115-113, and Danrex Tapdasan at 116-112. The other judge Alfie Jocosol favoured Paradero at 118-110.

It was a very sweet victory for Saludar, who has not fought since December 2019. Both Saludar and Paradero were inactive for more than a year due to the COVID-19 pandemic. Also, the bout’s schedule was rescheduled twice for the same reason.

The world title at stake yesterday was vacated by erstwhile champion Thammanoon Niyomtrong, who was elevated to the WBA minimumweight super world champion. Niyomtrong has defended the title since 2016.

The Saludar-Paradero world title showdown was held in a bubble setup and was promoted by Elorde International Promotions of Gabriel “Bebot” Elorde Jr. / rcg

Read Next
Husband kills wife then self in Lapu-Lapu City