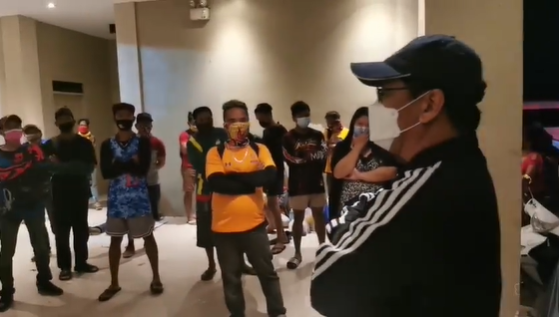 She also said that they only coordinated with Baring barangay officials in distributing the food packs, by taking goods at some stores in Olango Island, with the city government paying for those goods.

Each evacuee has received five kilos of rice, 15 pieces of canned goods, 5 pieces of instant noodles, and 5 pieces of powdered milk.

Cuizon said that currently, they still have 3,000 relief goods on standby at the Hoops Dome.

The Lapu-Lapu City government is implementing the preventive evacuation with tropical storm Auring expected to pass the northern part of Cebu on Monday.

Meanwhile, CSWDO has also recorded 400 individuals who got stranded at Angasil Port in Barangay Mactan.

Cuizon said that the CSWDO had also distributed food meals to the stranded individuals.

(But they had already been ferried home after they requested to the mayor to allow a fastcraft to ferry them home with permission from the Coast Guard as well.) /dbs