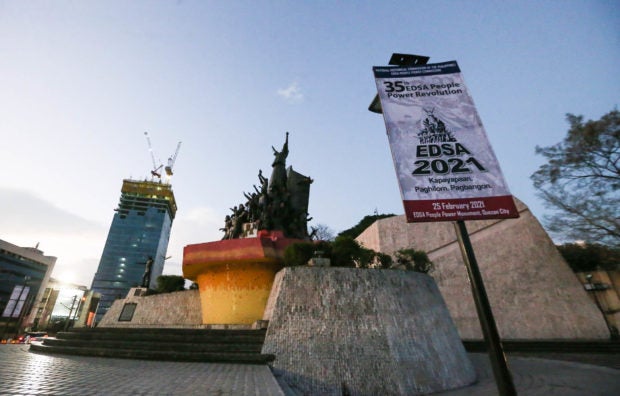 Under the section on dictator Ferdinand Marcos’ flight to Hawaii, someone put the lyrics of rapper EZ Mil’s “Panalo”: Like they said though, you can take the man out of the hood, but you can’t take the hood out of the man…

The lyrics were up for barely a minute before EDITOR685422 reverted the change. It has since been pushed to the page’s digital backroom, which stores the over 2,200 edits ever made on this Wiki page.

These reverts are made by a small group of vigilant volunteer editors—Wikipedians, they call themselves—who guard its pages from vandalism and disinformation. While they’re used to working on their own, Edsa’s 35th anniversary presented a unique opportunity to team up with the Human Rights Violations Victims Memorial Commission (HRVVMC) for a weeklong virtual “edit-a-thon,” or editing marathon to improve open-sourced content.

Lorenzo Martinez, HRVVMC research and education division officer in charge, said it was the first Edsa-related edit-a-thon in partnership with a government agency. It’s also the second overall, following martial law-focused editing in 2020. The goal: to combat disinformation on the two most contentious events in contemporary Philippine history.

The edit-a-thon, itself a long-standing part of Wikipedia’s vibrant culture, is crucial to the commission’s mandate to pursue transitional justice for martial law victims, Martinez said. In particular, he said, it “helps in the right-to-know aspect [of justice]: promoting essential truths on the period of martial law and Edsa.”

Around 35 editors, mostly members of the Wiki Society of the Philippines (WSP), Bantayog ng mga Bayani Foundation and Martial Law Chronicles, joined the weeklong marathon, he said. The editing sessions were interspersed with lectures from the University of the Philippines’ history department.

Their goal is to add credible information and resources in Edsa- and martial law-related pages, Martinez said. Weeding out vandals or trolls is a pesky, but relatively minimal, part of the work.

Before the marathon, the foundation’s former Wikipedian-in-residence and current volunteer, Red de Leon, trained the volunteers on the platform’s community guidelines.

While basically “everybody can be an editor,” De Leon said, aspiring contributors must follow three core content policies: “provide a neutral point of view; no original research; and sources must be verifiable.”

Most editors, he said, “actually start small: [editing] capitalization, spelling errors. Then some of us decide to stick with it. Many earn much experience in editing because there are rules for proper citations, properly raising your POV, maintaining narrative and intellectual neutrality in the article, and so on.

Pica Guerra, a veteran Wikipedian, said experienced contributors usually monitor pages which they feel are “particularly vulnerable” to malicious editors. In her case, those pages include: the Marcos family (Ferdinand, Imelda, Imee and Ferdinand Jr.), the Philippine economy under martial law; the timeline of the Marcos dictatorship, its human rights abuses, and Ferdinand Marcos’ cult of personality.

Guerra, an editor for the platform since 2006 with over 30,000 edits under her belt, said these pages were often at the center of trolling. Their Wiki pages’ edit history shows the spirited debates among contributors on what should and shouldn’t go into a published narrative.

The Ferdinand Marcos page alone has had over 7,170 edits since 2002. It’s also host to pro-Marcos revisionist accounts who “often cause a big headache and great damage to the article,” noted one WSP member, who requested anonymity for this story.

Before they went inactive, both were often in the Top 10 editors on Marcos-related pages like People Power Revolution or the Marcos family pages, per their Wiki stats.

They also often engage in “edit warring” against editors they deem biased.

In one exchange in 2017, users scored TheTruth16 for “trying to push his personal point of view”—a big violation of Wikipedia’s guidelines—and arguing against edits insinuating that Marcos was a “kleptocrat.”

“I don’t know and I’m not in a position to answer whether he’s a kleptocrat or not,” TheTruth16 said. “What I know is, while he has wealth far in excess of his salary, he hasn’t been convicted guilty (nor is Imelda) of taking money from the government coffers. I think that you need to present both sides in Wikipedia rather than just present one side alone and dismiss the other side as “conspiracy theory.”

Because Wikipedia allows complete anonymity, its stewards can’t identify specific actors or machineries pushing for specific agendas. So “we don’t know if they were done by individuals or a group of individuals using a single account, or if they were paid or purely voluntary,” the WSP member said.

False narratives left unchecked on its platform “could be easily perpetuated” by people who depend on Wikipedia for information and historical context, De Leon said.

He noted that both martial law and Edsa as historical topics were particularly susceptible to disinformation because “there isn’t a well-established metanarrative [for both] yet.”

Said Martinez, himself a history researcher: “The subject of Edsa is also the subject of many opinions, and it is a space where people often try to erase certain aspects. [Part of this] is because of the cynicism toward Edsa: it accomplished its immediate goals of toppling the dictatorship but repeated the same norms post-Marcos.”

This is where Wikipedia’s role as a neutral guardian of facts and reserve of resources comes in, De Leon said. After all, the only way to argue the validity of a narrative, whether it be the atrocities of martial law or the heroes of Edsa, is to “protect accuracy… [through] three core policies: no original research, neutral POV, verifiability and reliable sources.”

“There is so much material on Edsa and on the Marcoses out there but it’s not organized yet,” he said. “It becomes even more important to have Wikipedia as a guide to the references that do exist.

[You’re] protecting accuracy, but also trying to keep it simple, so you have to make sure the narrative doesn’t get hijacked in the process.”