Collective action to bring about change. A bloodless revolution.  Fight for freedom.

This is what the Edsa Revolution also known as the People Power Revolution means to some of the youth leaders of Cebu today, 35 years after the historic event happened. 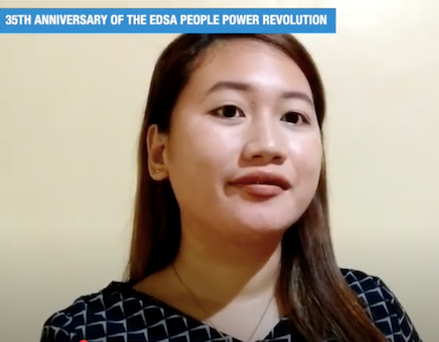 For Rhea May Ambrad, a Sangguniang Kabataan chairperson of Barangay Mantalongon, Dalaguete town in southern Cebu, the freedom she enjoyed today is the result of the Edsa “People Power” Revolution.

“Millions of Filipinos marched along Epifanio Delos Santos Avenue who cried for change, who prayed for the dictatorship of President Ferdinand Marcos to end. So, the Filipino people can start anew and live a democratic life,” Ambrad, 21, said in an interview.

Arron Bruce Clarin, Esmeca-Ann Ngujo, and Cherrie Mae Ano, youth leaders of Batan-on alang sa Kalambuan sa Cordova (BAKA-C), for their part, see the People Power Revolution as a as a collective voice to bring about the common good.

Askin Villarias, 22, of the Cebuano Youth Ambassadors Inc., also has a similar view and described the Edsa “People Power” Revolution as the “cradle for the Filipinos’ collective action into reinstating democracy through peaceful means from  decades-long dictatorship under Ferdinand Marcos.

Villarias said that this even strengthened the Bayanihan spirit of Filipinos in reclaiming freedom and the value of human rights in a democratic society. 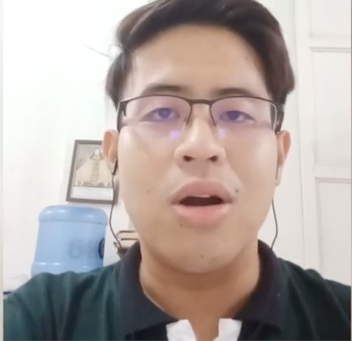 Askin Villarias of the Cebuano Ambassadors Inc. says that the Edsa “People Power” Revolution has strengthened the bayanihan spirit of the Filipino people in reclaiming their freedom through bloodless means. | screen grab from Pegeen Maisie Sararaña’s video on Youths and Edsa Revolution

And with the freedom enjoyed today because of the People Power Revolution, BAKA-C’s youth leaders believe that this is the reason that the event should be commemorated each year and for them to continue the gains from that bloodless revolution 35 years ago.

“The true essence of bravery is not about violence,” Ano added.

BAKA-C’s youth leaders said that the Edsa Revolution was a good start for the youth to continue to call for change and amplify their voices.

“If we see wrong, call for a change because our voice matters,” they said.

Ambrad urged her fellow youths to use what we gained from EDSA Revolution.

“Let us speak. Let us exercise our freedom of speech,” Ambrad said.

BAKA-C leaders – Esmeca-Ann Ngujo, Arron Bruce Clarin,  and Cherrie Mae Ano (from left) – say that the Edsa “People Power” Revolution should be commemorated each year so that the freedom gained from the event will be remembered and not taken for granted. | screen grab from Pegeen Maisie Sararaña’s video on Youths and Edsa Revolution

Villarias, for his part, also offered a word of caution and reflection of what the Edsa Revolution is.

“Let us also reflect on how we should avoid blind fanaticism towards any politician regardless of their political affiliations. In a democratic country, like the Philippines, we should remember that the authority must be derived from the governed and not from any politician using any threat of force,” Villarias added.