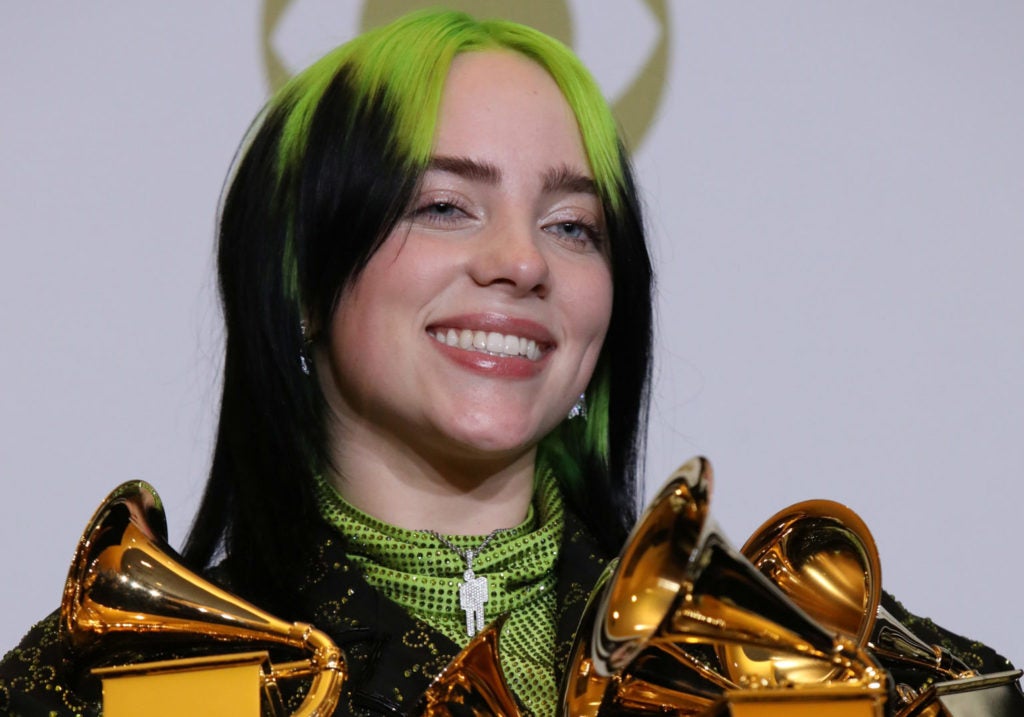 Billie Eilish poses backstage with her awards to include Song of the Year for “Bad Guy” , Best New Artist, and Album of the Year for “When We All Fall Asleep, Where Do We Go?”. REUTERS/Monica Almeida/File Photo

LONDON  – A new documentary captures Billie Eilish’s meteoric rise to fame, in an intimate portrayal of the teenager recording music at home, passing her driving test, going through a relationship break-up and meeting her idol Justin Bieber.

Filmmaker R.J. Cutler first met Eilish, known for her unique sound, when she was 16, describing her as “real and awesome and easy and quirky and funny and somebody I thought I’d love to make a movie about”.

“It’s the story of this … remarkable figure … who is simultaneously going through a kind of artistic arrival … and … professional arrival and … coming of age,” he told Reuters.

Eilish, now 19, and her producing partner brother Finneas are regularly shown making music together at home, rehearsing songs such as the theme for the upcoming James Bond movie “No Time To Die”.

“It’s very exciting to see how they work together and collaborate together,” Cutler said. “It’s very natural.”

The film, released on Apple TV+ on Friday, features home footage of Eilish as a child and shows her working on her chart-topping album “When We All Fall Asleep, Where Do We Go?”. It ends with her Grammys win last year, when she became the youngest person to scoop the top four awards in one night.

Cutler said his team had complete editorial control over the film, which also shows Eilish battling health issues and learning to deal with fame.

In one scene, she is seen telling an audience: “This is so weird you guys, I’m nobody. I don’t know why you like me.”

Gloc-9 lauds Shanti Dope as ‘Amatz’ gets featured in Marvel’s ‘The Falcon and the Winter Soldier’: ‘Ibang level ito!’