Oliva: Writ of habeas corpus can be executed any day, DSWD-7 should release Lumad child 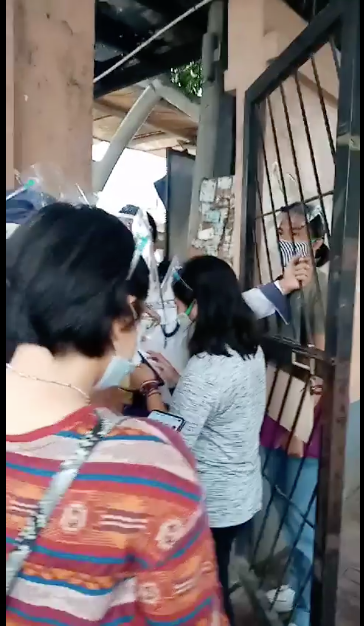 Members of the Save Our Schools (SOS) Network were denied entry to the DSWD-7 compound when they tried to ask for the Lumad child’s release following the issuance of a writ of habeas corpus from a Cebu City court.

CEBU CITY, Philippines — A writ of habeas corpus order from the court knows no weekend, that’s why the Department of Social Welfare and Services in Central Visayas (DSWD-7) must release the Lumad child to her father immediately.

This was the statement of Lawyer Regal Oliva, the Integrated Bar of the Philippines (IBP) Cebu City Chapter president, over the refusal of the DSWD-7 to release the Lumad child to her father even after the court ordered so.

The father was concerned that since it was already the weekend, that his child would remain “detained” by the DSWD-7 until next week.

“Just like any order, supposedly, it does not have any day when it comes to habeas corpus, unlike criminal cases. You can actually implement the order in any given time and any given day. The writ should be immediately executory even on a weekend. But we can have the writ implemented because this is for the best interest of the child,” said Oliva.

However, Oliva warned that the DSWD-7 can employ delaying tactics on the release of the child because in reality during the weekend, the father’s camp cannot officially communicate with DSWD-7 Director Rebecca Geamala, and the release can be further delayed.

“They can still dilly-dally us and she can hide as much as we can that we cannot locate her and we cannot serve the summons of the court,” added the lawyer.

Another challenge is imposed by the filing of the motion for reconsideration of the DSWD-7 to the court with regards to the previously released writ as the court may decide to withhold the implementation of the writ.

As of now, though, the order stands and Oliva believes further withholding of the child can constitute a contempt of court on the part of the DSWD-7.

“I don’t understand why the DSWD-7 as the agency pushing for social services is doing this to children especially to a child deprived of the guidance and moral ascendency of the father who is very willing to be in the custody of his child. I don’t know what is going on and where this government is heading when the rights of not only of people but even the children are already being trampled,” said Oliva.

The IBP Cebu City Chapter has submitted a manifesto to the Cebu City court urging them to send a sherrif to DSWD-7 and implement the writ order.

The Save Our Schools (SOS) Network, which has claimed responsibility for the Lumad children’s education through the Bakwit School Program, said that the DSWD-7 is employing delaying tactics to release the children.

They alleged that the DSWD-7 stands in fear that the children’s statements would defy their “narrative” over the controversial “rescue-raid” of the police of the Lumads who were staying in a retreat house in Cebu City in February 15, 2021, for alleged child trafficking, and debunk the legitimacy of the said operation.

SOS is mulling to file charges against the DSWD-7 and its officials for “detaining” the child amid the court order and refusal to release her to the father who was been acknowledged by the court as the legal custodian of the child.

“We are looking into that and rest assured that hindi namin palalampasin to,” said SOS.

SOS also reminded the public that as they fight for the release of this particular child with a proper court order, a bigger fight continues for the release of the adult Lumad students and Lumad teachers that have been detained by the police pending charges of illegal trafficking and other cases.

The network continues to fight for the release of the Lumads from police custody following the raid. /rcg