MANILA, Philippines — State-run People’s Television Network (PTV) is now looking into a supposed error in one of its social media posts, wherein President Rodrigo Duterte’s surname was replaced with the #DutertePalpak hashtag.

According to a statement from PTV, a “wrong hashtag” was used in sharing a story about Duterte’s directive to provide the public with free face masks in the face of a recent surge in COVID-19 cases.

The #DutertePalpak hashtag was used by administration critics on Monday to commemorate one year since lockdowns were implemented due to the pandemic. The hashtag was also aimed at calling out the government’s allegedly inadequate handling of the pandemic.

“At around 7:00 p.m., a post of PTV on Twitter circulated with the wrong hashtag which was never in the original caption which reads: ‘President Rodrigo R. Duterte reiterated his order to provide free face masks for the public especially to those who cannot buy their own’,” the PTV said in its statement.

“PTV is currently investigating the intent behind this malicious post. Our apologies,” it added.

The PTV tweet created a stir in social media, particularly because a state media outfit used a hashtag critical of the president.

Several netizens have kept screenshots of the tweet, leading to its spread even after the original tweet had been taken down. 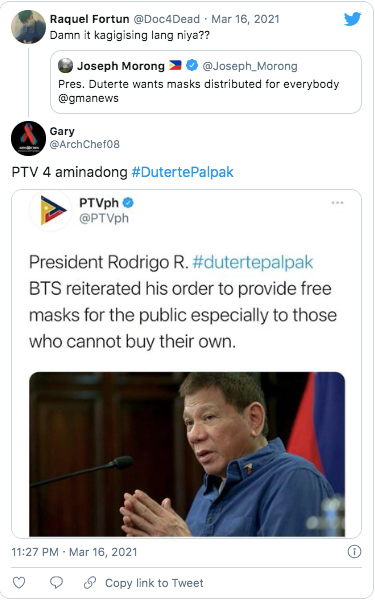 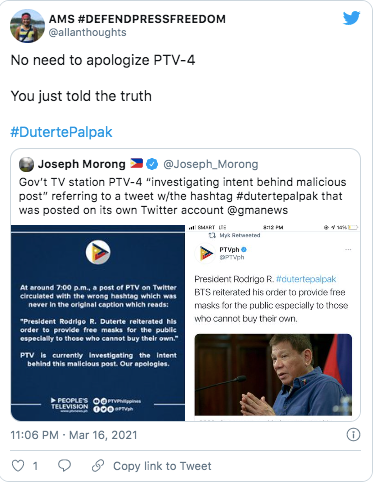 On Monday, as the #DutertePalpak hashtag trended, presidential spokesperson Harry Roque was quick to clarify that the president could not be blamed for the surge in COVID-19 cases as these were the result of the spread of more infectious variants.

Roque also insisted that the government was doing an “excellent” job of managing the pandemic before the variants of struck.

As #DutertePalpak trends, Palace claims COVID-19 surge not due to gov’t incompetence