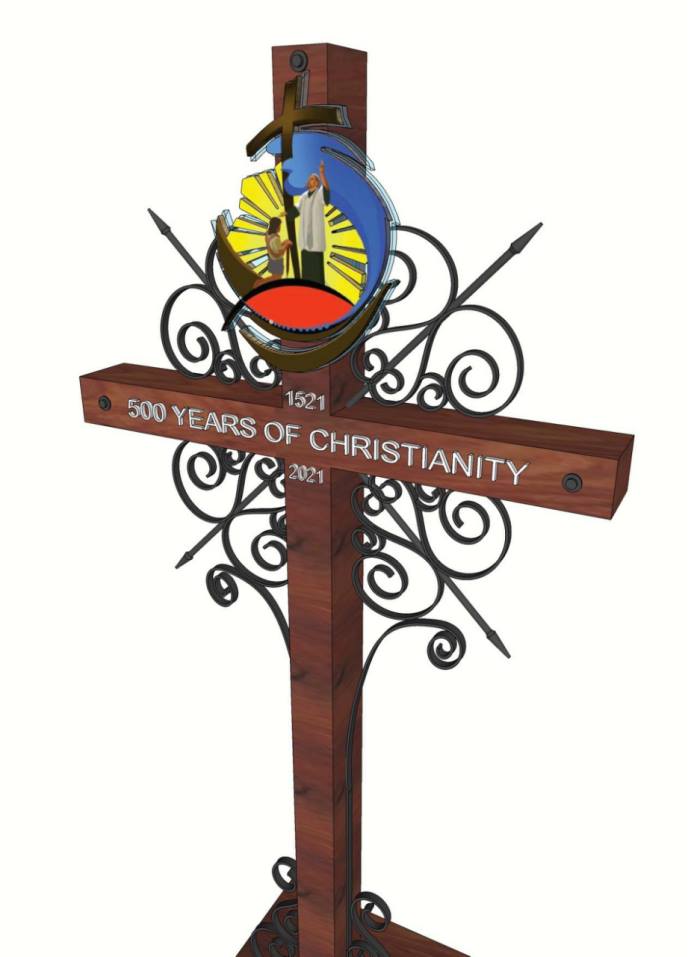 CEBU CITY, Philippines – The unveiling of a 30-foot tall Jubilee Cross in Consolacion town not only marked the start of the quincentenary celebrations for the arrival of Christianity in Philippines but also marked the site for the establishment of a Jesus Christ statue that could be taller than Brazil’s Christ The Redeemer.

The Jubilee Cross mounted on a hilltop in Barangay Garing was inaugurated during a “small and short” ceremony on Sunday, March 14.

Msgr. Ruben Labajo, the vicar general of the Archdiocese of Cebu, officiated the blessing of the cross which was designed by Diocesan priest Fr. Brian Brigoli.

The actual cross has a height of 7.5 meters but the platform where it was erected made it taller, enabling it reach up to nine meters or approximately 30 feet.

It is also equipped with solar-powered, rechargeable LED lights and that it will be lit up every night, overlooking the skyline of Metro Cebu.

According to Brigoli, the cross’ design, notably the ornate trimmings on its side, is inspired by Baroque art.

“When the Spaniards came they brought baroque influences even in architecture and visual arts,” said Brigoli.

Meanwhile, construction of the 130-foot Jesus Christ of the Divine Mercy statue is slated to start in early 2022.

Christ the Redeemer, one of the New Seven Wonders of the World and a popular tourist attraction in Rio de Janeiro, Brazil, stands at 124 feet.

Representatives of Palafox from the Palafox Architecture Group Inc., also present during the ceremonial unveiling of the Jubilee Cross on March 14, said the project’s full design will be completed by December this year after incurring slight delays due to the ongoing coronavirus disease 2019 (COVID-19) pandemic.

“We are happy that it will push through after we submit the complete Architectural and Engineering drawings. We are hoping we could start (construction) by the end of this year,” said Architect Stephen Ralota from Palafox Architecture Group Inc.

Ralota said they need at least a year to complete the construction of the 130-foot Jesus Christ of the Divine Mercy statue.

“Us in Palafox Group consider this project as an iconic building. Once finished, it will be one of the tourist spots of Cebu. So we cannot just build it in haste or in mediocrity. We are happy to be involved in this iconic structure,” he added.

Both the Jubilee Cross and the Jesus Christ of the Divine Mercy statue will be sitting on a hilltop estimated to be 250 meters above sea level. / dcb

Read Next
Pagasa: Still low chance that dry season will start in PH