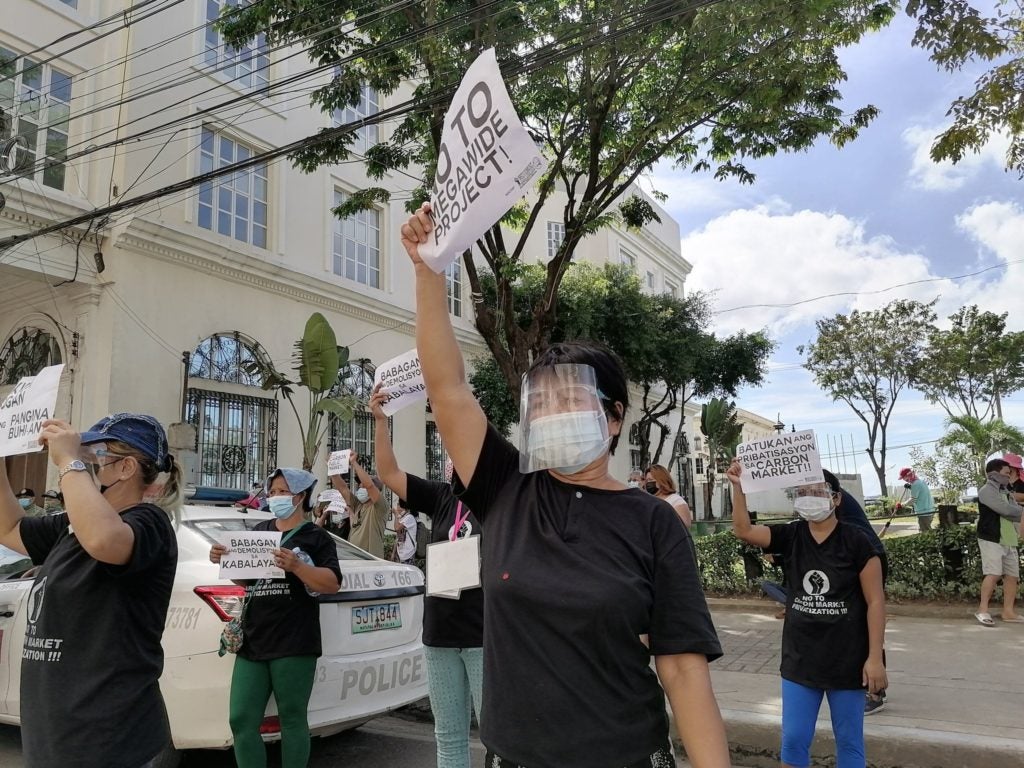 At least 100 vendors and stakeholders of the Carbon Public Market in Cebu City hold a rally in front of the Cebu City Hall on March 1, 2021, to protest plans for its modernization. CDN Digital photo | Morexette Marie B. Erram

CEBU CITY, Philippines — The Carbon Market modernization project should have broke ground today, March 17, 2021, but was postponed under the orders of Mayor Edgardo Labella due to the concerns aired by the vendors in the market.

Market Operations Division head, Irvin Caballes, said the mayor has ordered to temporarily suspend the groundbreaking of the P5 billion public-private partnership project with Megawide due to the outcry of the vendors.

However, Caballes assured the public that compromises have been made between Megawide and the vendors, and most of the small issues such as whether all vendors can sell in the market or how big the space of each stall would-be has been settled.

All vendors in the Carbon Market currently registered with the city will have a stall in the new Carbon Market after its construction, but the vendors will take turns in shifts to use the stalls as only 1,500 stalls will be provided which is barely half of the over 3,000 vendors in the market.

The city government also promised that the 700 informal settlers in Sitio Bato will be relocated properly before any displacement will happen.

Still, other issues remain including the collection policy for the rent, which under the joint-venture-agreement will be done by Megawide to maintain the market, which was vehemently opposed by the vendors.

Caballes said that most of the issues are settled and the groundbreaking may continue within the month after all.

This was not the view of the vendors who said that the main issue they want to be resolved are the most crucial ones. They believe that if these will not be resolved, Carbon will be lost to the Cebuanos.

Erwin Goc-ong, the president of the Cebu Market Vendors Multi-Purpose Cooperative (Cemvedco), said in a phone interview that they want the city government to maintain control in the management and the collection of rent for the new Carbon Market especially that Megawide plans to reduce the public market to less than a third than it is today.

The Megawide already explained in the session that this policy does not mean any sort of prioritization of the market, but they are only delegated to collect rent by the city government because Megawide will be the one to maintain the market.

Any increase in the rent would also go through the City Council and will still be subject to the market code.

The vendors also complained about why the market code of the city should be amended to accommodate the JVA, to which Megawide replied that without the amendment in the market code, none of the JVA terms can be achieved.

“The market code will always be above the JVA,” said Megawide representatives in the session.

Caballes said that while they continue to iron these details of the agreement between the corporation and the stakeholders, the city government will temporarily postpone any movement in the constructions.

Still, the city government is determined to push through with the public market’s modernization. /rcg

Read Next
#SMthing to look forward at #TheBIGSMCebuSale