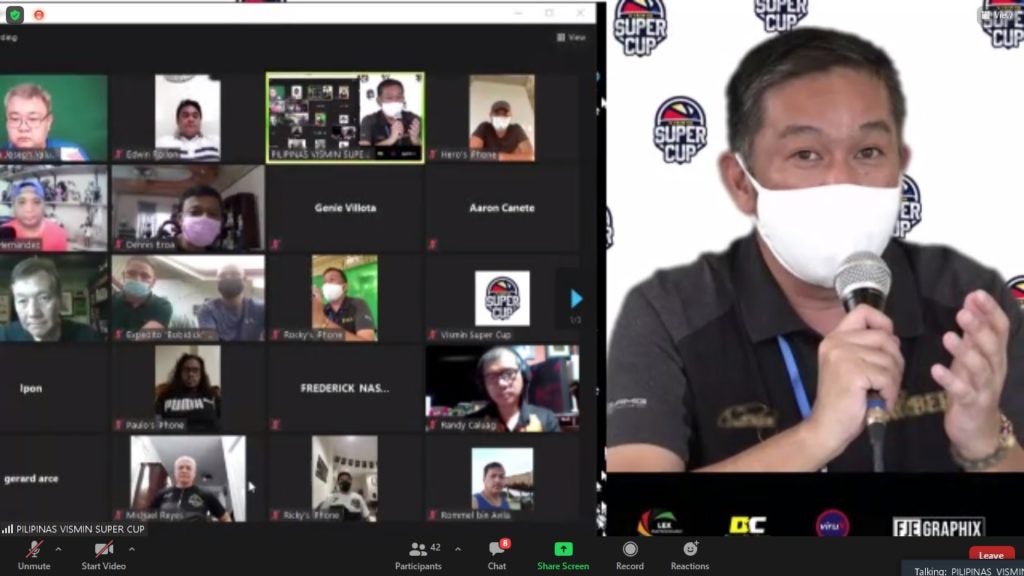 Pilipinas VisMin Super Cup COO Rocky Chan talks to the members of the media during a virtual press conference on Tuesday, April 6, 2021.

CEBU CITY—- The Pilipinas VisMin Super Cup organizers will proceed with the staging of the league despite the recent threat of the Maharlika Pilipinas Basketball League (MPBL) to demote active MPBL players who will compete in the VisMin Super Cup which will tip off on April 9, 2021, in Alcantara town, southwestern Cebu.

In a virtual presser on Tuesday, April 6, 2021, the league’s Chief Operating Officer (COO) Rocky Chan said that it is the MPBL’s prerogative to sanction their players who will compete in the seven-team VisMin Super Cup’s Visayas leg.

For Chan, any move from the MPBL will not affect their league adding that the main purpose of organizing this major basketball tourney outside Metro Manila is to provide a livelihood to players, officials, and even utility personnel who were badly affected by the COVID-19 pandemic.

MPBL announced on April 1, 2021, that they would sanction and demote all pro players in their league who will play in the VisMin Super Cup to ex-pros and thereby subject to the limitations of their league’s rules and by-laws.

The announcement left many MPBL players in a quandary.

Chan announced that several players who have mother teams in the MPBL have already backed out to prevent jeopardizing their current contracts.

“That is their prerogative. they have their own rules. On the part of the Pilipinas VisMin Super Cup, we just have to firm up with our stand,” said Chan during the virtual presser.

“We are here to help players have a livelihood at mabigyan natin ang mga Pinoy basketball fans kahit gaano kahirap, kahit paano makapanood ng basketball na inaasam asam nila. We are here to put a little smile on their face despite the hardships they are going through these days.”

For MJAS-Zenith Talisay City’s team captain, Paulo Hubalde, an ex-player of Val City in MPBL, he is very thankful for being part of the VisMin Super Cup.

He said that many players like him benefited from the league after losing their livelihood due to the COVID-19 pandemic.

According to Chan, players who have backed out from their teams in the VisMin Super Cup will be replaced immediately.

Each team has the option to muster a 20-man line-up in case of injuries or COVID-19 infection. However, all replacement players must be tested and must undergo quarantine before they can join their team inside the bubble.

“Merong several players maybe two or three confirmed na nag backout from KCS and ARQ. They needed to be released after ordered by their mother team in the other league. It is sad, but we will be able to adjust sa line-ups sa teams namin sa league,” said Chan.

The organizers of the league and the LGU of Alcantara left no stone unturned in preparing for the league. They made sure everyone inside the bubble setup in Alcantara town are safe from the dreaded COVID-19 virus.

Chan proudly announced that a total of 200 players, coaches, league officials down to utility personnel tested negative for the COVID-19. “It means everyone inside the bubble is safe and sound.”

As a preventive measure, everyone inside the bubble setup will undergo another round of COVID-19 tests on the eve of the tip-off on April 9, 2021.

Chan revealed that they would only have a simple opening ceremony, and they are also hoping that Governor Gwendolyn Garcia will grace the event.

The league organizers said those who will violate the rules inside the bubble will be meted with a P50,000 fine and will be evicted from the league.

“Ang hirap ng situation ngayon. We are here already, all the teams spent too much already at kung may iilang pasaway nakakalungkot talaga. We have to implement something very strict,” added Chan.

Read Next
Win a Helios 300 Gaming Laptop and other Predator prizes at the Predator League 2020/21 Grand Final!