SANTA CATALINA, Negros Oriental — At least 30 policemen will now help secure a sitio in a mountain barangay, which was once described as a “no man’s land” by authorities in Santa Catalina town in Negros Oriental because of the presence then of New People’s Army rebels (NPAs) there.

This developed after the Police Regional Office in Central Visayas (PRO-7) opened a police substation in the town’s Sitio Kakha in Barangay Talalac today, April 24.

(This is the substation that will take care of our brothers here give them assistance with regard to their complaint and respond when there is an alarm.)

He also said that the policemen at the police substation would also be assisted by Provincial Police Mobile Force, who would help in patroling the entire area.

He also said that this initiative was started by General Debold Sinas, who is now the Philippine National Police director, when he was still PRO-7 chief in 2019.

The police substation in Sitio Kakha, Barangay Talalac in Santa Catalina town in Negros Oriental will be manned by 30 policemen. | Pegeen Maisie Sararaña

Barangay Talalac is a mountain barangay in Santa Catalina, Negros Oriental, which is estimated to be at least 13 kilometers from the town’s national highway.

(Considering that our area is 13 kilometers from the highway, our residents would find it difficult to report our problems because they would have to go down the mountain [to the police station in the town.])

Digay said that the police substation would be a great help to the estimated 6,000 residents in the barangay, who would benefit from it.

(Before, especially if there were incidents, it would take at least 24 hours for them to report the incidents. We could not immediately report these to the police.)

Montejo agreed with this observation.

He said that having a police substation there would benefit the residents because they would not have to travel to the town’s proper to raise their concerns.

Digay, for his part, also said that the barangay could be considered as partially cleared of insurgents with the continuous followup operations of the military and police.

He said that it would only be partially cleared from insurgents because there were still parts of the barangay where the presence of the rebels were reported. 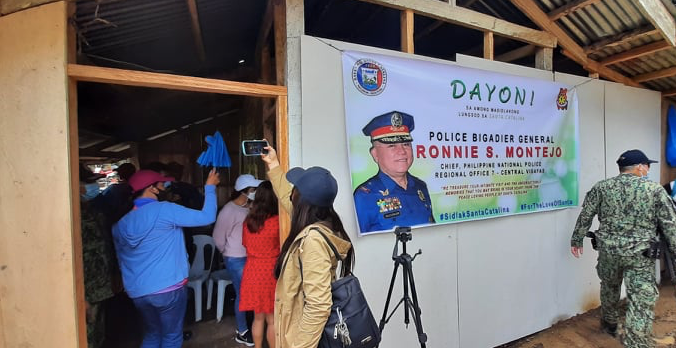 The policemen manning the police substation in Barangay Talalac in Santa Catalina town will be assisted by the Provincial Police Mobile Force in patroling the area. | Pegeen Maisie Sararaña

Meanwhile, Mayor Peve O. Ligan of Santa Catalina town, who attended the opening of the police substation, said the activation of the substation there would be a great help for the sitio, which was once considered as a “no man’s land” for quite a long time because of the presence of NPAs.

With the substation, Ligan said they were empowering the community to coordinate with the government to improve services there for the development of all the sitios in the barangay.