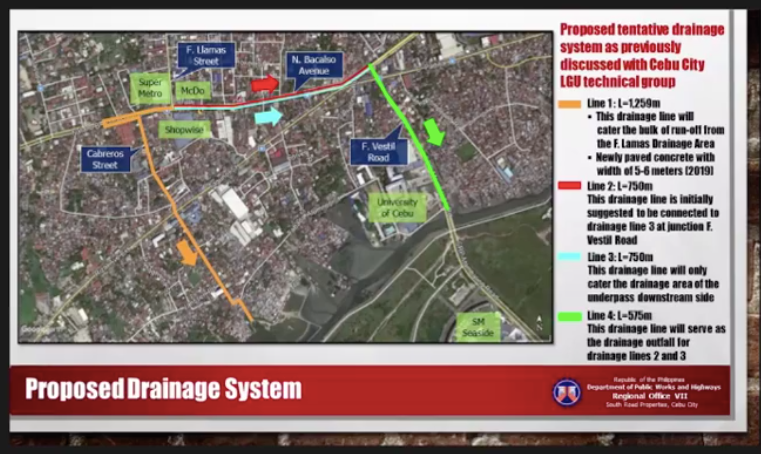 CEBU CITY, Philippines — The Cebu City Council is appealing once more to the Department of Public Works and Highways in Central Visayas (DPWH-7) to solve the drainage problem at the Mambaling Underpass.

The DPWH-7 presented to the council during the regular session on April 28, 2021, their drainage plan for the area after the underpass was flooded on March 31, 2021.

Engineer Nonito Paylado, the DPWH planning division chief, told the Council there will be a widening of up to 2.7 by 3.7 meters. of the drainage culverts in the Natalio Bacalso Highway along the Mambaling underpass.

An expansion by 3 by 3 meters of the drainage will also be conducted at Cabreros Street to serve as the outflow path of the water from the underpass and highway to the sea.

Similarly, another drainage line will be widened at F. Vestil Street to serve as the outflow path for the run-off water from the N. Bacalso Highway.

However, Councilor Eduardo Rama, Jr., has been concerned that the portion of the expected drainage widening at N. Bacalso and Cabreros has recently just been paved.

“At the side of Shopwise there is a barangay road which we have inspected further. This barangay road is a possible replacement of the Cabreros outfall in lieu of the fact that our Cebu City Engineering District has paved Cabreros Street,” said Paylado.

If they choose to use this unnamed barangay road near Shopwise, the construction may take time because a portion of the road already has houses blocking it and there will be negotiations involved to fully widen the drainage.

Still, the DPWH will be coordinating with the necessary agencies to work on this problem should they choose this unnamed barangay road.

However, Councilor Rama said the best option would be to place the culverts in Cabreros Street since the roads lead straight to shore and the drainage can be directed to the sea.

This is why he expressed frustration that there seems to be a lack of coordination between the Engineering District and the DPWH as to why the street was paved without drainage widening.

Rama appealed to the DPWH-7 and the Engineering District to coordinate with each other so that this “mistake” will not happen again.

Vice Mayor Michael Rama expressed his disappointment that the Mambaling Underpass has become a bigger problem than it has ever been.

He urged the DPWH-7 to hasten the solving of the drainage problems because the longer the problem continues, the longer people in the area will suffer.    /rcg