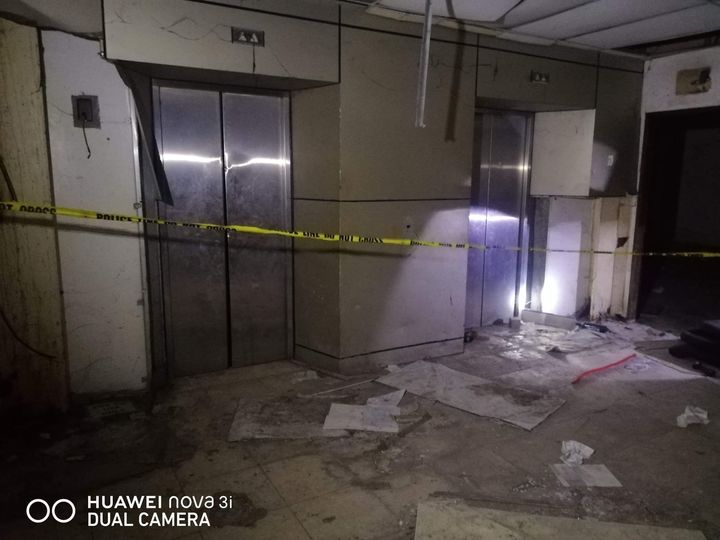 MANDAUE CITY, Cebu- Foul smell coming from a dilapidated elevator at the old Cebu International Convention Center (CICC) in Mandaue City led to the discovery the body of a certain Arjon Canangga.

Canangga, 33, has been missing for three days.

Quiadhon also signed a waiver on Tuesday, June 1, to signify that she no longer wanted Canangga’s body to undergo autopsy.

But Gingoyon said that they will continue to investigate his death.

Canangga’s body was found inside an elevator at the CICC around 9 p.m. on Monday, May 31, by a search team that consisted of relatives.

The victim is a resident of Sitio Basubas in barangay Tipolo.  He has five children, including a still unborn child.

His cousin, Anna Mae Dejito, said that Canangga was last seen around 10 p.m on Friday, May 28 . He asked  P20 from Quiadhon before he left their house on board a bicycle to buy cigarettes.

But he never came home.

Quiadhon at first thought that her common-law husband was staying with relatives to avoid from getting arrested for curfew violations.

She started to worry when she still did not hear from him the next day.

Relatives who were looking for Canangga found his bicycle parked inside the CICC compound located at the North Reclamation Area.

When they started to search the place for signs of him, they were led to the CICC elevator by the foul smell that was coming from the area.

It was there that they found Canangga’s body.

Responding policemen saw Canangga’s shirtless body.  They also found wounds on his head and the different parts of his body.

Gingoyon said that the victim may have been dead for two to three days already when found.

But police investigators are yet to determine what caused his injuries.  They are also to determine if he was killed in the area or if his body was merely dumped there.

Quoting information from CICC compound residents and its security personnel, Gingoyon said that Canangga was a notorious robber. He was part of a group that would victimize people in the area.

He was arrested for theft in October 2014 but was later on released from detention after his complainant opted to no longer pursue the case.

Gingoyon said they are looking at the possibility that Canangga may have been killed by members of their rival group.  But he said that investigating his death will not be easy after Quiadhon refused his autopsy.  / dcb

Read Next
Signal No. 1 still up in 12 areas in Cebu