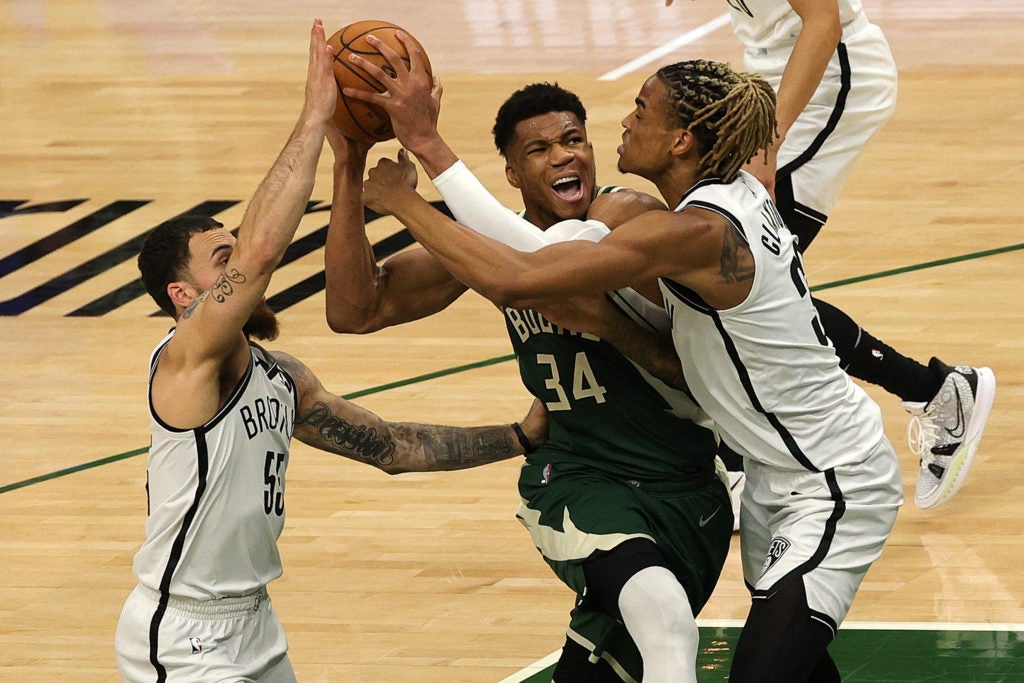 Giannis Antetokounmpo of the Milwaukee Bucks is defended by Nicolas Claxton and Mike James of the Brooklyn Nets during the first half of Game Three of the Eastern Conference second round playoff series at the Fiserv Forum. | AFP photo

Khris Middleton scored 35 points and two-time NBA Most Valuable Player Giannis Antetokounmpo scored 33 as the Bucks — routed in two games in Brooklyn — trimmed the deficit in the best-of-seven series to 2-1.

In the day’s other game, the Utah Jazz took a 2-0 lead in their best-of-seven Western Conference semis series against the Los Angeles Clippers after scoring a 117-111 victory in Game 3.

Donovan Mitchell had 37 to lead the Jazz.

Kevin Durant led the Nets with 30 points and 11 rebounds, but his three-point attempt to force overtime bounced off the rim and the Bucks avoided falling into an 0-3 hole.

“It looked good, but thank god it didn’t go in,” Antetokounmpo said of Durant’s final attempt.

The Bucks were coming off a humiliating 39-point loss to the Nets in game two in Brooklyn, and in the first game of the series in Milwaukee they came out playing as if their lives depended on the outcome.

Antetokounmpo and Middleton scored 15 points apiece in the first quarter as the Bucks seized a 30-11 lead.

The Nets turned the tables in the second period, opening the quarter on a 15-2 scoring run.

They out-scored the Bucks 31-15 in the second — but they didn’t get their first lead of the game until the third quarter, when Bruce Brown’s jump shot put them up 65-64 with just over a minute remaining in the period.

It was nip and tuck the rest of the way, the Bucks taking a two-point lead into a fourth quarter that saw four lead changes, with neither team leading by more than four points.

Middleton pushed the Bucks’ lead to three with two free throws that capped the scoring.

“At the end of the day we kept our composure,” Antetokounmpo said. “We stayed together … we kept trusting our habits and we were able to stay in the game and get the win.”

The Bucks will try to level the series when they host game four on Sunday.

Kyrie Irving added 22 points for the Nets, who were again without the third piece of their star trio, James Harden, who is nursing a hamstring injury.