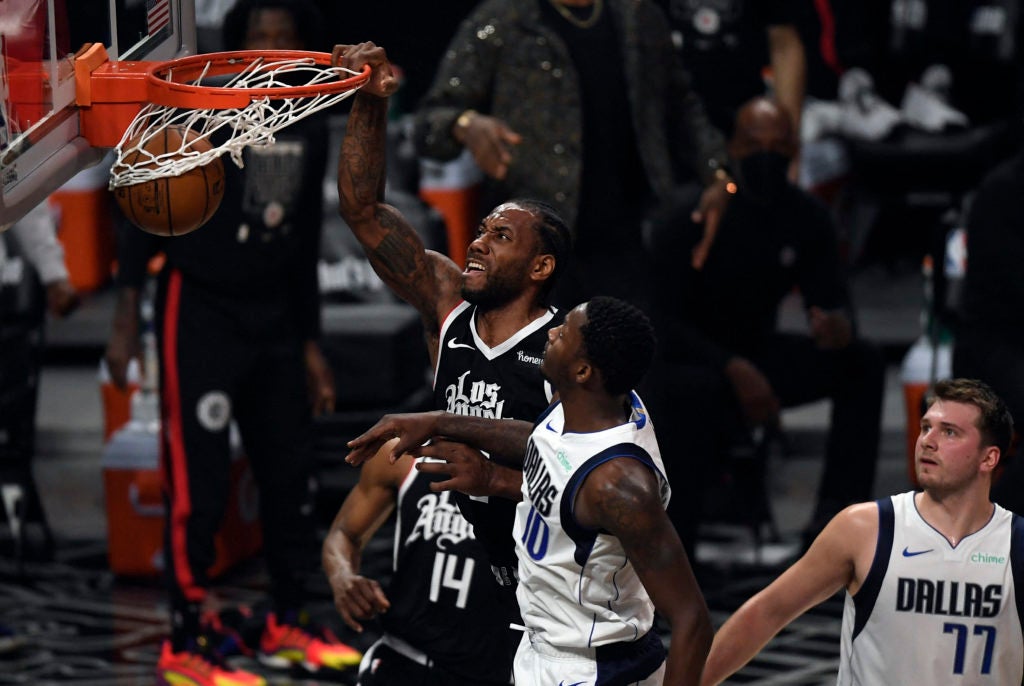 Kawhi Leonard of the Los Angeles Clippers dunks the ball against Dorian Finney-Smith of the Dallas Mavericks during the first half of Game Seven of the Western Conference first round series at Staples Center on June 6, 2021 in Los Angeles, California. | Photo by KEVORK DJANSEZIAN / GETTY IMAGES NORTH AMERICA / Getty Images via AFP)

Los Angeles, United States—Kawhi Leonard finished with 28 points, 10 rebounds and nine assists as the Los Angeles Clippers won game seven at home with a 126-111 victory over the Dallas Mavericks to punch their ticket to the second round of the NBA playoffs.

Los Angeles withstood a 46-point performance from Mavericks star Luka Doncic on Sunday (Monday, June 7, 2021, Philippine time) to take the Western Conference series 4-3, finally cashing in on home court after the road team had won each of the first six games.

“It’s all about the moment,” Leonard said. “You got to be aggressive all night and don’t try to make the game be perfect.

“We never gave up. We wanted to get better and we did it, especially on the defensive end.”

Marcus Morris scored 23 points and Paul George tallied 22 and dished out 10 assists for the fourth-seeded Clippers in front of a pandemic-limited crowd of 7,300 at Staples Center arena in downtown Los Angeles.

The Clippers advanced to the second round to face the top-seeded Utah Jazz with game one on Tuesday in Salt Lake City.

The NBA will crown a new champion this season after the Los Angeles Lakers were eliminated on Thursday.

The Clippers are the sixth team in NBA history to lose the first two games of a series at home and win a series.

“It was a total team win. We wanted this moment,” said Clippers coach Tyronn Lue. “It was a great test for us, making us battle tested going into the second round. That was a great win for us.”

Doncic continued his superb play in the series despite playing with a sore neck suffered in game four. He added 14 assists and seven rebounds Sunday in his first game seven in just the second playoff series of his young career. The Mavericks also lost to the Clippers in the first round last season.

“We gave everything,” Doncic said. “I’m very proud of this team. Obviously I hate losing. We hate losing, but I’m proud of my team.”

Dorian Finney-Smith had 18 points and 10 rebounds and Kristaps Porzingis finished with 16 points and 11 rebounds for the Mavericks, who had a chance to close out the series on Friday in game six but lost 104-97.

Doncic scored 29 points in the first half on 10-of-14 shooting from the field, including four threes. But he managed just six points in the third quarter.

Los Angeles led 100-85 at the end of the third, and then extended their lead to 19 points with just over nine minutes left in the fourth. Dallas cut the led to 114-107 with two minutes to go but Reggie Jackson answered with a clutch three pointer and the Clippers closed it out from there.

At Philadelphia, Trae Young scored 35 points and the Atlanta Hawks held off a late rally to beat the 76ers 128-124 in the opening game of their second-round series.

Young, who averaged 29 points a game in the first round of the playoffs, pushed the visitors to a 19-point lead with eight minutes remaining only for Atlanta to struggle down the stretch and barely hang on for the victory.

The Hawks grabbed a 1-0 lead in the best-of-seven Eastern Conference semi-final series with game two at Philadelphia on Tuesday.

The series winner will face Milwaukee or Brooklyn to determine a berth in next month’s NBA Finals.

Bogdan Bogdanovic and John Collins each added 21 points for the Hawks while Clint Capella added 10 points and 11 rebounds for Atlanta.

Cameroonian center Joel Embiid started for the Sixers after missing the final game of Philadelphia’s first-round series against Washington with a right knee injury.