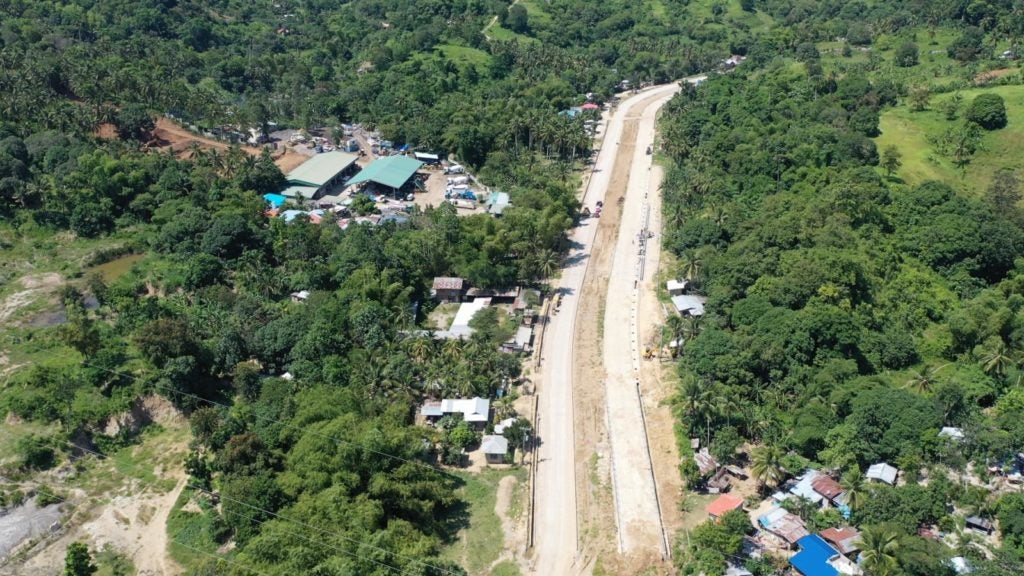 Progress of the Metro Cebu Expressway in southern Cebu as of February 2021. | Photo from DPWH Sec. Mark Villar

CEBU CITY, Philippines – At least 300 households in Minglanilla town may be displaced should the national government proceed in implementing changes for the multi-billion Metro Cebu Expressway project.

Mayor Elanito Peña and Councilor Rajiv Enad confirmed to reporters that project proponents from the Department of Public Works and Highways (DPWH) are planning to move portions of the expressway downhill, affecting some residential areas.

As a result, they urged state engineers to stick to original plans of constructing the P28-billion expressway away from communities and houses.

“It’s not that we are in rage but we just want to prevent the displacement of a lot of our residents. We understand it’s a national project but it seems there was minimal coordination made with us,” Enad said in Cebuano.

He added that no public consultation was made and that they only learned about the proposed changes in the project after they received complaints from the residents.

(In Barangay Vito alone, almost 200 would be affected. Plus 100 more households in neighboring barangays. A lot could be displaced.)

Peña, Enad, barangay officials, and members of the homeowner associations in Vito had called for a meeting with the Central Visayas office of DPWH (DPWH-7) to discuss the matter.

During the meeting, Enad said, the local government was informed that the decision whether or not to move portions of the expressway near residential areas lies at DPWH’s central office.

“We were grateful the meeting was productive and DPWH-7 was receptive to the clamors of the residents and our request. They were very much willing to hear us but it’s just that they cannot decide this for themselves. It is up to DPWH’s central office,” he said.

This development also prompted the councilor to file a resolution soon, urging Public Works and Highways Secretary Mark Villar to heed their request.

“Our plan is to request Secretary Villar if possible to retain the old route,” said Enad.

“They (DPWH-7) told us that the feasibility study was already completed and withdrawing from their new plans could be more costly. But they haven’t started construction yet so we will try our best to raise this matter to the Secretary himself,” he added.

Reporters tried to reach DPWH-7 director, Engr. Edgar Tabacon, for his comments but to no avail as of this posting.

It spans approximately up to 74 kilometers and covers eight localities.

Funded through a Public-Private Partnership (PPP), Metro Cebu Expressway was designed to cut travel time between Naga City and Danao City from the usual three hours to one hour only.

Construction has already begun for the 17.2-kilometer Segment 3 that traverses Naga City, Minglanilla, and Talisay City.

Segment 2, spanning around 30 kilometers, will cover Mandaue City, Consolacion, and Danao City while Segment 1, with a length of 26.8 kilometers, encompasses Talisay, Cebu City, and Mandaue City.

But should DPWH push through with the changes they planned for Metro Cebu Expressway, Enad said, they already raised several proposals to cushion its impact and consequences.

These included identifying possible alternative routes that could hit fewer houses, and asking DPWH’s legal office to ensure those who will be affected by the project can get fair and just compensation once Road-Right-of-Way (RROW) will ensue.

Read Next
Why are we bullied?