Clippers down Suns in Game 5 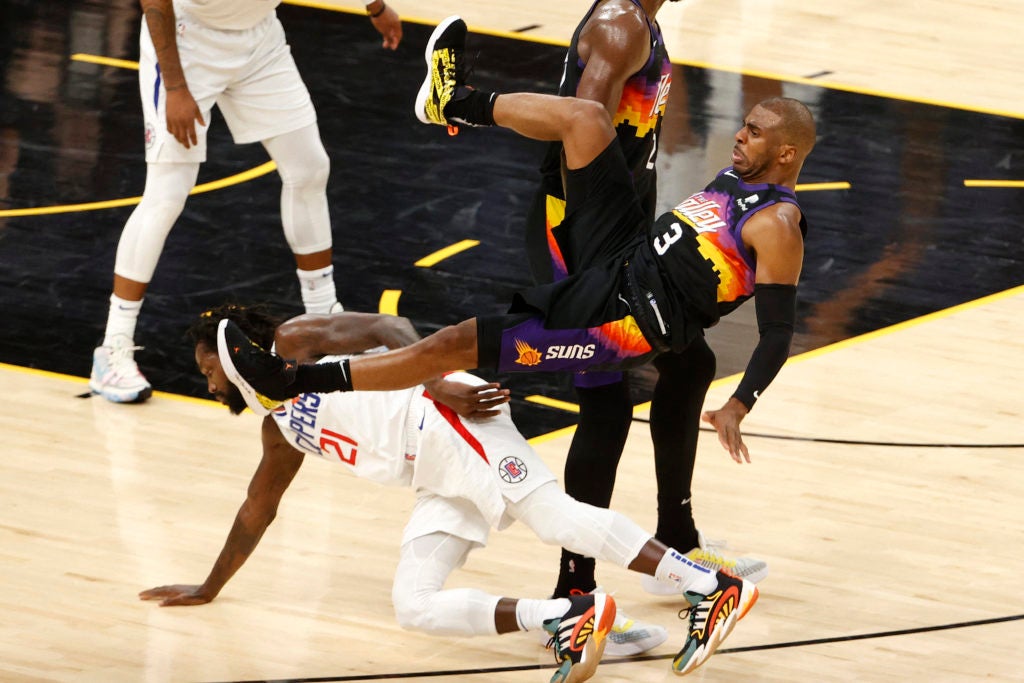 Chris Paul of the Phoenix Suns loses his balance after being fouled by Patrick Beverley of the LA Clippers during the second half in Game Five of the Western Conference Finals at Phoenix Suns Arena on June 28, 2021 in Phoenix, Arizona. | AFP photo

With the Suns poised to clinch a series victory in front of an expectant home crowd, George once again put the Clippers on his back to stave off elimination from the postseason.

The Clippers talisman exploded for 20 points alone in the third quarter to take the game away from Phoenix, who took a fleeting lead midway through the period with a Chris Paul jump shot.

It was the only time Phoenix held the lead throughout game five, and the Clippers can now level the series at 3-3 with a victory in game six in Los Angeles on Wednesday.

The win marked the third time during these playoffs that the Clippers have won an elimination game.

George, who is stepped up as de facto team leader in the absence of the injured Kawhi Leonard, was in commanding form once more on Monday after a quiet first half performance.

The Clippers star went 15-of-20 from the floor with three three-pointers, 13 rebounds and six assists.

The Clippers got off to a first start, opening up a 10-point lead at 36-26 after the first quarter and leading 59-52 at half-time.

But Paul’s jump shot to give Phoenix their first lead of the night at 62-61 in the third quarter was the catalyst for George to take over.

The 31-year-old seven-time All-Star erupted for 18 points over the remainder of the period, quickly restoring a double-digit lead for Los Angeles which ultimately proved decisive.

Although Phoenix rallied in the fourth to get within five points, back-to-back three-pointers from Jackson helped the Clippers pull clear and close out the win.