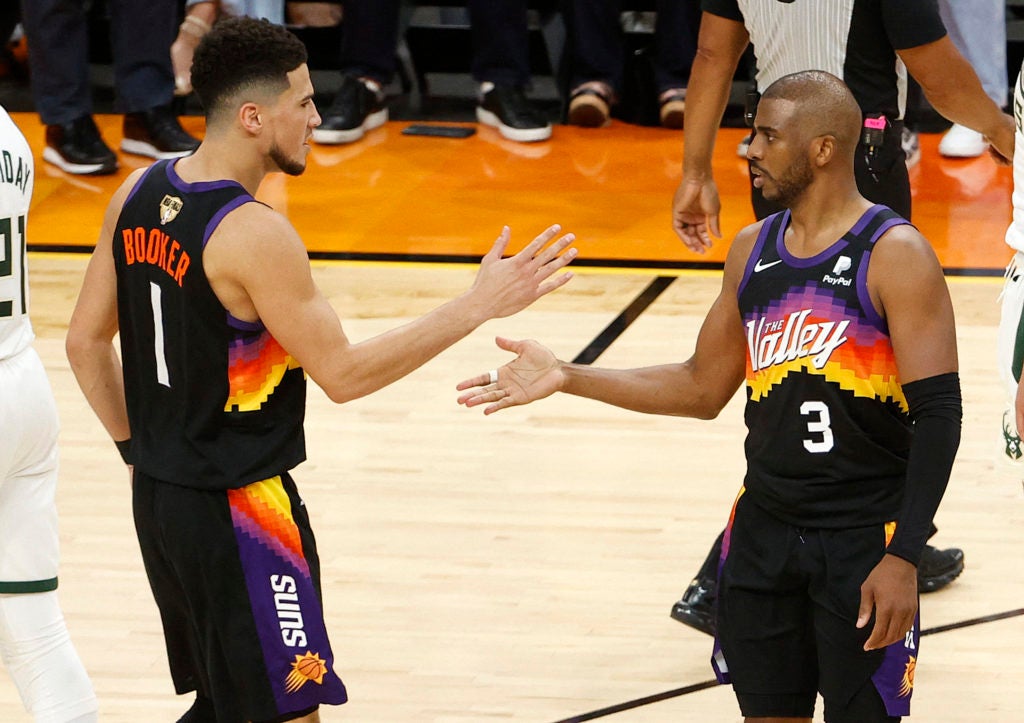 Devin Booker and Chris Paul of the Phoenix Suns celebrate during the second half in Game One of the NBA Finals against the Milwaukee Bucks at Phoenix Suns Arena on July 06, 2021 in Phoenix, Arizona. | AFP photo

“I just kept trying to be aggressive and my guys got going,” Paul said. “It’s trust. We’ve played like this all season. We just have to stay locked in.”

Phoenix will try to grab a 2-0 edge when the best-of-seven showdown continues Thursday.

“There was a lot of energy coming into this game,” Paul said. “We got one. We’ve got to get another one.”

The Suns, in the NBA Finals for the first time since 1993, seek their first league title while the Bucks, in their first finals since 1974, won their only crown 50 years ago.

Milwaukee started Greek star forward Giannis Antetokounmpo, who had missed two games with a hyperextended left knee, and he contributed 20 points and 17 rebounds in 35 minutes.

But even with 29 points from Khris Middleton, it wasn’t enough against Paul and a swifter, more defensively aggressive Suns squad.

Paul, with the second-most games of any NBA player making his finals debut, went 12-of-19 from the floor, 4-of-7 from 3-point range, and 4-of-4 fron the free throw line.

Paul went 6-of-7 for 16 points in the third quarter, when the Suns stretched the lead as large as 20 points.

Antetokounmpo scored off a rebound to pull Milwaukee within 101-94 in the fourth quarter, but a steal and hoop by Paul helped keep the Bucks at bay.

Ayton became the first player with 15 points and 15 rebounds in his NBA Finals debut since Tim Duncan in 1999.

The Suns went 25-of-26 from the free throw line, missing only the last to keep them from an NBA Finals record.

The Suns, who haven’t lost in 11 playoff games when leading by 10 or more, opened a 65-52 lead early in the third quarter.

Antetokounmpo had eight points, five rebounds and two assists in the first quarter, making a solid start after being a game-time decision.