Committee to decide what is ‘standard’ adobo 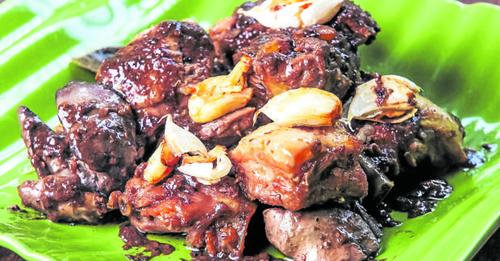 What makes an A-1 adobo? Are all adobos created equal?

These are hardly the questions that can keep anyone up at night, but the Department of Trade and Industry (DTI) has apparently worked up an appetite to ponder them.

The DTI has formed a committee to come up with a “national standard” for adobo (a meat dish marinated in soy sauce and vinegar) and other popular Filipino favorites as “sinigang” (sour stew), “sisig” (chopped pork with onions, chili, usually served on a hotplate) and lechon (roasted pig).

In a statement on Friday, the Bureau of Philippine Standards (BPS), an agency under the DTI, said a technical committee (TC 92) has been established to develop Philippine National Standards (PNS) on native viands.

The process will take into consideration the different ways to cook the dish across the country, the bureau said.

The first on the committee’s menu is adobo.

“With this, the question, ‘How can we say that this is the basic Philippine Adobo?’ serves as the main guide of BPS/TC 92 members in determining the common denominator among all the known ways of cooking it. Benchmarking the cooking technique for Philippine Adobo will help preserve the country’s cultural identity despite the variations made to it,” the BPS said.

The bureau said the committee, chaired by Glenda Barreto, a chef who established Via Mare Corp., aims to standardize the cooking technique for the well-known Filipino dish, especially given “various cooking methods for Philippine adobo published online by food writers, bloggers, and vloggers.”

A draft PNS document on the adobo will soon be circulated nationwide for the review and comment of concerned stakeholders.

Efforts to come up with a state-approved standard for local dishes started on May 11 with the release of “Kulinarya: A Guidebook to Philippine Cuisine’’ as the committee’s main reference.

The guidebook was authored by six chefs, including Barreto and TC 92 Vice Chairperson Myrna Segismundo.

Read Next
Port of Cebu condemns smuggled, counterfeit cigarettes worth over P90M