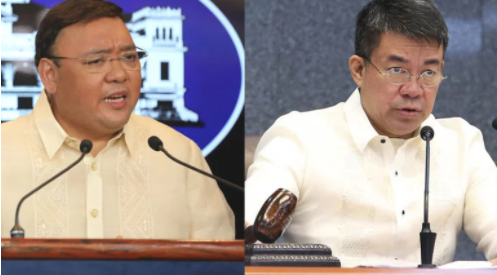 Senator Koko Pimentel had this to say Thursday as he hit back at presidential spokesperson Roque after the latter said the ruling party PDP-Laban’s membership will be reduced to a “jeepney-sized” group should they oust President Rodrigo Duterte as party chairman.

“Hindi kami worried doon and if he meant is as an insult hindi rin kami nainsulto dun,” Pimentel, the party’s executive vice chairman, said in an interview with The Source.

On Wednesday, Roque noted that PDP-Laban only had a handful of members before Duterte joined them.

(PDP-Laban was just the size of a jeepney before President Duterte joined them. If you remove the President from PDP-Laban, you will go back to being that small jeepney.)

But should this be the case, Pimentel said PDP-Laban was built on ideology and its principles, and not by numbers.

“Kung kami ay babalik sa pinakamaliit na bilang, then we will strive again to sell our ideology our basic principles and participate in the elections and who knows, with the people’s support and the blessings of God, we might return to becoming the ruling party. Hindi yan ang purpose ng PDP-Laban, to be the ruling party,” the senator added.

INQUIRER.net has reached out to Roque for comment but has yet to receive a reply as of posting time.

Duterte is set to attend PDP-Laban’s national council meeting and assembly on July 16 and 17 organized by party vice-chairman Alfonso Cusi.

But Pimentel is urging members of the PDP-Laban not to attend the meeting, which according to him, is “unauthorized.”

Infighting in the PDP-Laban party seems to be far from over, with two factions now appearing to be forming—the group of Pimentel and party president Senator Manny Pacquiao, and the group of Cusi.

It has come to a point where Pacquiao expelled Cusi and two others from PDP-Laban for allegedly violating provisions of the party’s constitution “by showing allegiance to a political party apart from PDP-Laban.”

Read Next
Bucks defeat Suns to even NBA Finals