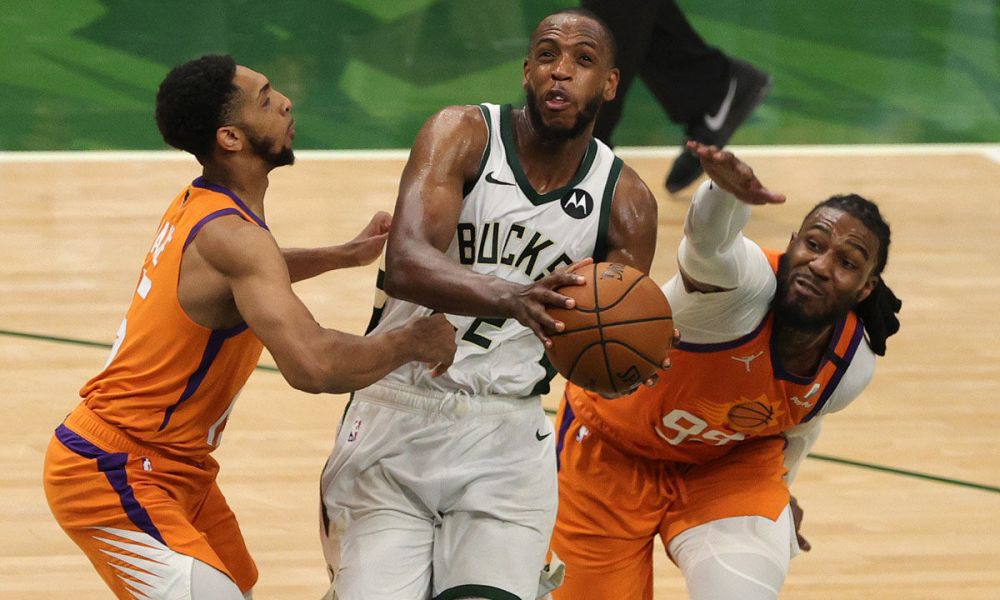 Cameron Payne and Jae Crowder of the Phoenix Suns defend against Khris Middleton of the Milwaukee Bucks during the second half in Game Four of the NBA Finals at Fiserv Forum on July 14, 2021 in Milwaukee, Wisconsin. (Getty Images via AFP)

MILWAUKEE, United States  – Milwaukee Bucks supporters are buzzing about the possible end of a 50-year NBA title drought while star Giannis Antetokounmpo fights to keep his focus with a crown tantalyzingly near.

The Bucks lead the best-of-seven NBA Finals 3-2 over Phoenix with game six Tuesday at Milwaukee, where 20,000 fans will fill the arena and 25,000 more will jam the “Deer District” outside to watch on huge videoscreens.

“You can feel the excitement in the city. But we got to focus,” Greek forward Antetokounmpo said Monday. “We got to do our job first. Then they can do their job celebrating at the end.” 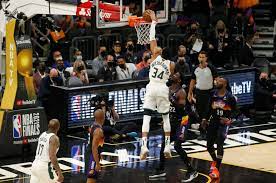 Giannis Antetokounmpo of the Milwaukee Bucks dunks over Deandre Ayton of the Phoenix Suns during the first half of Game Two of the NBA finals at Phoenix Suns Arena on July 08, 2021 in Phoenix, Arizona. (Getty Images via AFP)

“The whole city is buzzing,” Bucks guard P.J. Tucker said. “Everybody wants it.”

That just makes it tougher to stay in the moment for Antetokounmpo, who knows the Suns must win to force a seventh game Thursday at Phoenix.

“You work so hard to be in that moment. It’s hard not to get ahead of yourself,” Antetokounmpo said. “But this is the time that you got to be the most disciplined. Don’t get too excited. Don’t get too pumped up for the game. None of that.

“It’s hard. Sometimes you sleep and you’re dreaming about the game. But this is the time that we have to be disciplined. We cannot worry about having plans of celebrating. None of that, until it’s done.”

Antetokounmpo won’t let himself ponder how it would feel to win the title in Milwaukee, determined to stay in the moment.

“It would be nice to celebrate with the fans inside and outside and with our families, because this is something historical that’s happening in the city right now,” he said.

“I can’t focus on celebrating. You get too ahead of yourself. We got to focus on right now, focus on each possession, compete as hard as possible and put ourselves in a position to be able to win.”

Milwaukee guard Jrue Holiday wants the Bucks to play like they face elimination instead of celebration.

“It’s about playing desperate, like our back is against the wall,” Bucks guard Jrue Holiday said. “The job is not done.

“There would be no better place to do it than at home but we also have a team over there that doesn’t give up and plays well together.”

The Bucks can become only the fifth team in NBA Finals history to win the title after losing the first two games, a fightback feat managed by such stars as LeBron James, Shaquille O’Neal and Bill Russell.

“We don’t think about what’s at stake,” Bucks guard Khris Middleton said. “We’ve been doing a great job just blocking out distractions, focusing on the task at hand and what needs to be done.”

‘Going to be dogfight’

The Suns are focused as they face elimination for the first time in the playoffs.

“It brings out a sense of desperation, a sense of urgency, a sense of collectiveness within your group, knowing what you’re battling,” Suns forward Jae Crowder said. 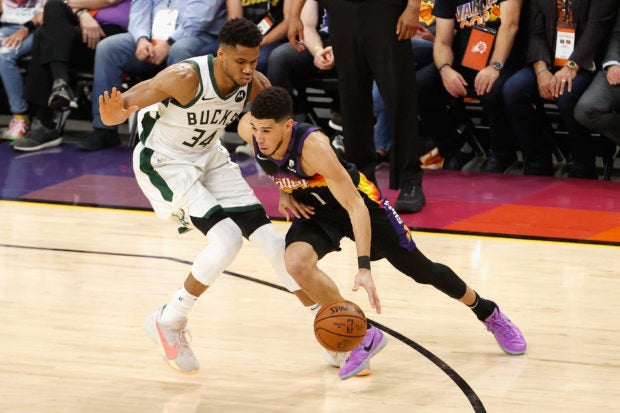 Devin Booker of the Phoenix Suns drives the ball against Giannis Antetokounmpo of the Milwaukee Bucks in game two of the NBA Finals at Phoenix Suns Arena on July 08, 2021 in Phoenix, Arizona. (Getty Images via AFP)

“It’s going to be a dogfight. You have to leave it all out on the court.”

The Suns were bolstered by rallying from a 16-point deficit to within a point with the ball in the dying seconds before losing game five at Phoenix.

“It’s all in our hands we feel like, and the confidence is where it needs to be,” said Crowder. “We know what we have to do. We know the mental lapses we’ve been having are self-inflicted.”

Suns coach Monty Williams has seen his team display resilience several times in the playoffs and knows it will help after dropping game five.

“It’s certainly a point of focus moving forward,” Williams said. “We have a level of bounce-back on our team that allows for us to get the spirit back.

“Those kinds of losses are hard, but if you’re going to do anything big, you have to overcome those kinds of ‘hards.’ We’ve talked about that, the deep playoff hurts that happen and the ability to bounce back from that.

“We’re in the finals. We got here for a reason and our guys can glean confidence from that.”