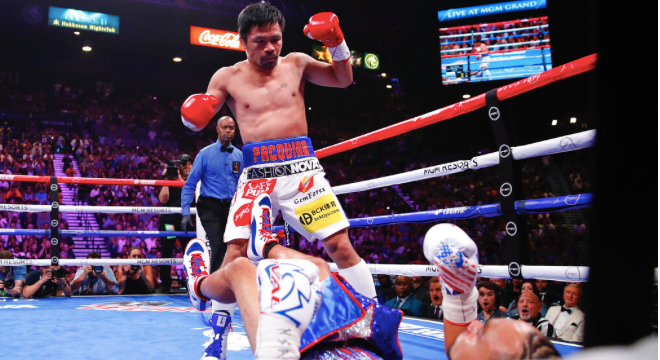 Manny Pacquiao towers over a fallen Keith Thurman whom he knocked down in the first round of their welterweight title fight on July 20, 2019, in Las Vegas, Nevada. (AP Photo/John Locher)

The mega-fight is set for tomorrow, August 21 (August 22 Manila Time) at the T-Mobile Arena in Las Vegas, Nevada.

CDN Digital asked opinions on the possible outcome of the fight from Cebu’s experts of the Sweet Science.

Based on their experience in boxing, they weigh in the pros and cons of fighting a last-minute (Ugas) replacement. They also gave their two cents on the possibility that the Fighting Senator will announce his presidential bid after the fight.

The well-known Villamor brothers, Edito and Edmund, both predicted that Pacquiao will wrest the WBA world welterweight title from Ugas although they differed slightly on the final outcome depending on how Ugas will engage the Pacman tomorrow.

With regards to Pacquiao announcing his bid for the presidency, Villamor said that he has no idea if the senator will announce it after the fight.

For Edmund Villamor, Pacquiao’s chances of winning the fight depend if Ugas will stick to his style of being a one-dimensional boxer.

For Omega Boxing Gym’s chief trainer, Julius Erving Junco, he predicts that the fight will go the distance with Pacquiao winning it.

“My prediction is it will go the distance and Pacman will outpoint Ugas. Knockout? Dili siguro. Ugas is the younger boxer. He can’t take Ugas for granted he is well prepared. Dili kaayo factor late replacement because Pacman is more comfortable fighting orthodox than southpaw and last fight niya against southpaw 2008 pa against David Diaz,”said Junco.

When it comes to Pacquiao’s presidential bid, Junco said he will support Pacquiao if he decides to run for the country’s highest office.

Tepora also revealed that he heard rumors that Pacquiao’s closest friend, Buboy Fernandez said that it will be Pacquiao’s last fight in the United States. The fighting senator will fight in the Philippines in 2022, so there’s a chance that Pacquiao will run for president.

International boxing judges Edward Ligas and Salven Lagumbay have differing predictions about how the fight will end although they both predicted a Pacman win.

For Ligas, Pacquiao cannot knockout Ugas because of size disparity. Instead, Pacquiao will win by decision.

“I guess Pacman can’t KO Ugas coz of size disparity. But I believe Pacman will win by decision. But if he will slow down from eight rounds to 12 rounds, Ugas will win by decision. Ugas is hungrier and wants to shine in an opportunity of a lifetime in his career. Although, a 10 day replacement but Ugas also trained hard on this fight coz his originally schedule as co-main event,” said Ligas.

“If he will win against Ugas, I believe he will announce it in front of the international media with regards to his plans to run for president. Kung mapildi murag sa October na mahibaw-an,” added Ligas.

Meanwhile, Lagumbay strongly believes that Pacquiao will win by knockout before or on the 10th round.

“Pacquiao by stoppage on or before 10th. Late replacements are dangerous, but Ugas won’t be a problem to Manny. No idea about him filing his candidacy. I hope he won’t. But if he ever does, I will support him.”          /rcg