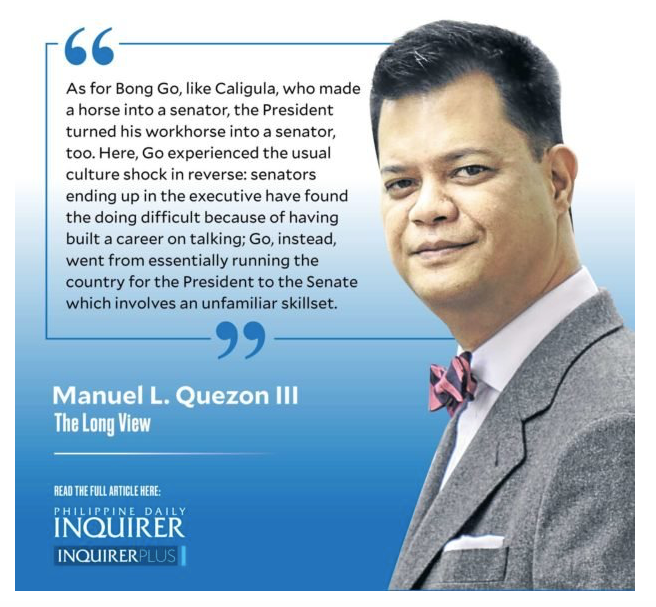 Recently in my newsletter, I repeated my belief that presidents are brought down not by their critics but rather, themselves. Take the President who has remained bulletproof as far as criticism is concerned because of two things. First, his systematic targeting of sectors and institutions to instill terror and thus, create an atmosphere of intimidation. Second, his being able to point to his lifestyle as unostentatious and thus, devoid of the cupidity associated with corruption. The two, in turn, could occur because of careful stage managing that kept the President out of the public eye except when he was rolled out to seize the headlines.

The stage manager was Christopher Go who carved out a remarkably powerful role for himself as Special Assistant to the President and holder of the Presidential Management Staff (PMS) portfolio. By all accounts, he hit the ground running, firing nearly everyone in the Protocol Office, and instituting a kind of hall monitor system complete with permission slips, putting an end to the free-flowing kibitzing that characterizes the Palace’s working culture. The result was an iron-clad news and information blackout in the Palace, strengthened by the removal of the permanent staff of the PMS to Aurora Boulevard.

Go then went on to mount one of the most effective, systematic takedowns of a rival faction in any administration: his bureaucratic battle, waged through competing executive issuances by the President, dismantled the administrative empire Cabinet Secretary Leoncio Evasco Jr. had created; in this manner, Evasco’s ideological objective of creating a permanent political movement was defanged, then killed off. Evasco left the government to pursue local office, lost, and came back to a powerless sinecure in the Palace after the midterms.

As for Go, like Caligula, who made a horse into a senator, the President turned his workhorse into a senator, too. Here, Go experienced the usual culture shock in reverse: senators ending up in the executive have found the doing difficult because of having built a career on talking; Go, instead, went from essentially running the country for the President to the Senate which involves an unfamiliar skillset. So much so that, while a member of the blue ribbon committee, he has found himself unable to influence the collapse of the corruption-free aura of his principal, the President. Another senator, Franklin Drilon, once upon a time made the transition from the executive to the legislative but without ending up dazed and confused. And so it’s because of Drilon that videos such as the RTVM documentation of the President in Panacan, Davao City, meeting with the executives of Pharmally International Holdings on March 17, 2017, are suddenly very embarrassing indeed.

Recall in September last year, Drilon had flagged the purchase of COVID-19 test kits from Pharmally; what was eventually disclosed was that after that transaction, billions of pesos were transferred by the Department of Health (DOH) to the Procurement Service of the Department of Budget and Management (DBM), an office held by Lloyd Christopher Lao since 2019 (he’d formerly headed the Housing and Land Use Regulatory Board, obtaining an extortion case for his efforts). Government offices, unable or unwilling to handle procurements, can and do, ask DBM to do it on their behalf; but that is generally on the pretext of lacking expertise in either procurement or the items to be procured: a surprising state of affairs on the part of medical equipment for purchase by the DOH. Drilon has been saying that Lao had to have had a backer, for a formerly obscure company to win billions in bids (for products costing more than those offered by other bidders) and identifying that backer will crack the case which, so far, is a “circumstantial” one. Go could have led the charge to vindicate his own name in the Senate but the best he could was call for Health Secretary Francisco Duque III to resign.

Instead, what has happened is that Go’s planned coronation as the presidential candidate of the ruling PDP-Laban (which already successfully excreted senators Pacquiao and Pimentel from its ranks) became a casualty of the lousy Lao story. This represented a double whammy to the ruling coalition because no less than “Daughterte” had been going after Go, identified as a gopher with too much veto power over who got to see the President, by issuing pointed statements as the press feasted on speculation that the President’s first family was in revolt against his second family.

TAGS: Bong Go, lao, Pharmally, presidents are brought down not by their critics but rather, stage manager, systematic takedowns, themselves