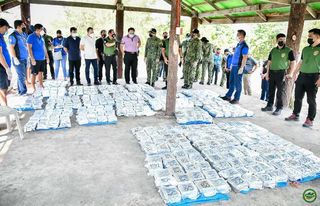 A total of 580 kilos of shabu were seized during successive anti-illegal drug operations on Tuesday, September 7, 2021. | Photo courtesy of Philippine Drug Enforcement Agency

MANDAUE CITY, Cebu – The top official of the Philippine Drug Enforcement Agency in Central Visayas (PDEA-7) believes that the recent anti-illegal drug operations that led to the confiscation of 580 kilos of shabu in Central Luzon will cause a dent in the supply of illegal drugs here.

PDEA-7 Director Levi Ortiz, in a press conference on Wednesday, September 8, 2021, said that the recent operation will surely have an effect in the illegal drug trade in Central Visayas, particularly in Cebu City.

Ortiz said the shipment of the confiscated drugs was allegedly intended to be distributed in several regions in the country, including Central Visayas.

Apart from the seizure of 580 kilos of shabu with an estimated value of P3.944 billion, PDEA Director General Wilkins Villanueva said that the succeeding operations also led to the death of four Chinese nationals and arrest of three others.

The two operations were under Case Operational Plan “Whisperer,” and were conducted by the agency in coordination with other drug enforcement units including the Police Drug Enforcement Group (PDEG), Armed Forces of the Philippines (AFP) Joint Counterintelligence Task Force Noah, NICA, Bureau of Customs, and the local police.

The operation began with a buy-bust operation around 11:30 a.m. in Zambales, which resulted to the death of the suspects identified as GAO Manzhu, 49; HONG Jianshe, 58; Eddie TAN, 60 all from Fujian, China and XU Youhua, 50 from Stanford Ville, Quezon City.

Pieces of evidence recovered from the suspects were 500 kilos of shabu, four firearms, a Toyota Fortuner, four mobile phones, and two Chinese passports.

XU Youhua was allegedly part of a transnational drug trafficking organization and was one of the biggest shabu importers in the Philippines.

Nowadays, Ortiz said that detainees are believed to be the main contacts from other countries when it comes to bulk importations of drugs.

A follow-up operation was conducted in Bataan around 4 p.m. on the same day, or almost five hours after the buy-bust operation, which resulted to the arrest of three Chinese nationals identified as 37-year-old ING Chang Zou; 49-year-old CAI Cai Bina; and 45-year-old LONGCAI Chang. It also led to the seizure of 80 grams of shabu and two mobile phones.