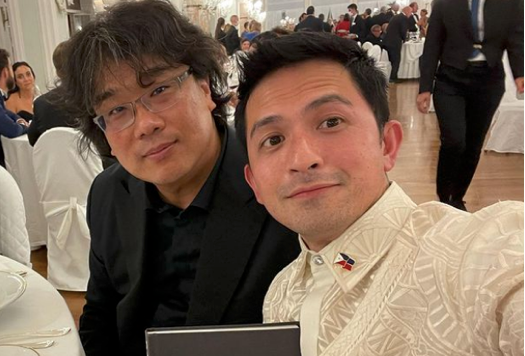 Dennis Trillo was commended by the Oscar-winning “Parasite” director Bong Joon-ho for his performance in the film “On the Job: The Missing 8.”

The actor received praise from the South Korean director at the Venice International Film Festival in Italy, as seen in a video on Trillo’s Instagram page today, Sept. 12. “On the Job: The Missing 8” competed in the festival as the only Southeast Asian entry.

“We all loved you in the film. You were so great!” Bong Joon-ho told Trillo as he gave the actor a thumbs-up.

English actress Cynthia Erivo and Canadian actress Sarah Gadon were also among those who congratulated Trillo for his performance in the film. Erivo described Trillo’s work as “brilliant” and “amazing.”

Bong Joon-ho, Gadon and Erivo were part of the panel of judges for the festival’s main competition. The Oscar-winning director was the festival jury head.

Trillo also had the director sign his copy of the “Parasite” graphic novel, which contains the film’s storyboards made by Bong Joon-ho himself, the actor showed through his Instagram page, also today.

“[Love you] tito (uncle) Bong! Thank you for signing my book,” he addressed the director.

Meanwhile, his co-star John Arcilla bagged the Best Actor award at the festival. Arcilla was unable to personally receive the recognition, though his trophy was received by the film’s director Erik Matti.

The crime thriller follows the story of journalist Sisoy Salas (Arcilla), who looks into the disappearances of his colleagues. Trillo plays Roman Rubio, a prisoner who fell into the gun-for-hire business.

The film is a follow-up to the internationally acclaimed 2013 film “On the Job,” which starred Joel Torre and Gerald Anderson.