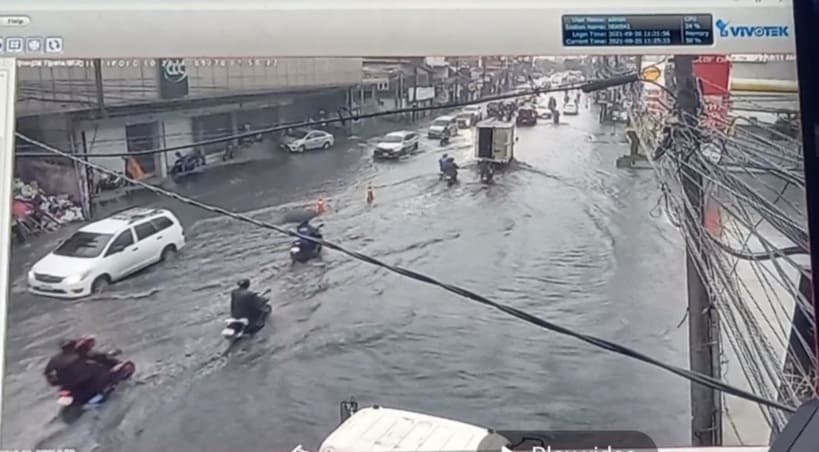 A screengrab from a CCTV footage of the area in Barangay Tipolo which is flooded after a downpour on Monday, September 20, 2021. CDN Digital photo | Mary Rose Sagarino

MANDAUE CITY, Cebu—The improvement of the drainage system along Lopez Jaena Street in Barangay Tipolo, here, plays a huge factor in lowering of level of flood water in the area, according to the Mandaue City Disaster Risk Reduction and Management Office (CDRRMO).

Felix Suico Jr., operations head of the Mandaue CRRRMO, said Lopez Jaena Street, which is one of the city’s flood prone areas, only experienced a below knee-deep floods on Monday morning, September 20, 2021, after a heavy downpour.

Suico cited the ongoing drainage construction in the area as a big help to lowering the level of floods there. He said before, the area would experience knee-deep or even higher level of floods that would even make it impassable for cars and motorcycles after a heavy downpour.

The Department of Pubic Works and Highways (DPWH) has increase the size of culverts in the cross drainage in the area.

The first half of the project is already nearing completion. Once it is done, the construction on the other side of the road will begin.

According to Benny Talaid, foreman from KRT construction, the construction started last July and is estimated to be completed in October or November.