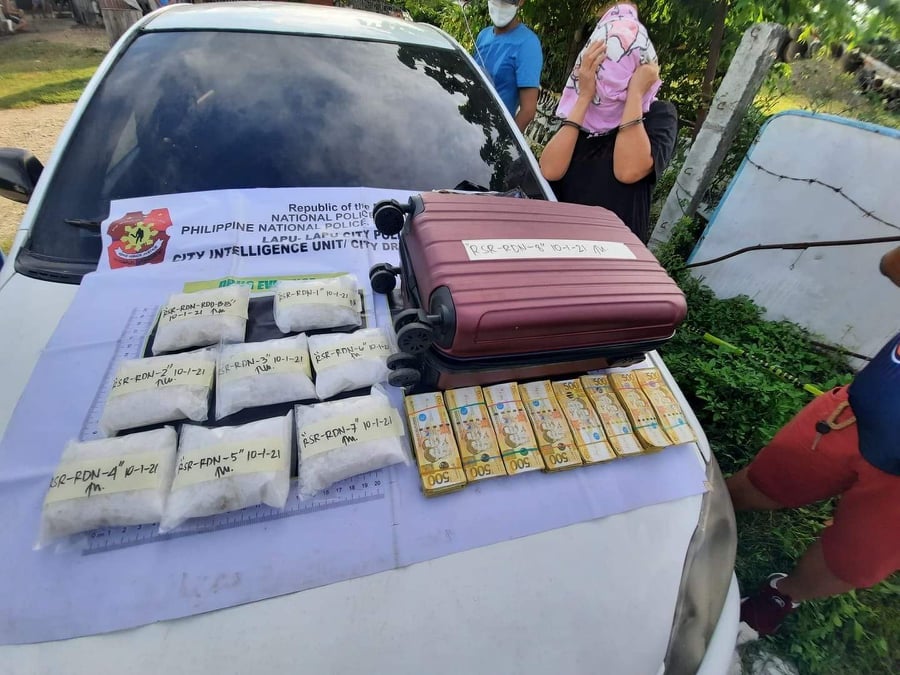 Around P27.2 million worth of suspected shabu were confiscated from two suspects in a joint buy-bust operation in Barangay Pusok, Lapu-lapu City at past 4 p.m. on Friday, October 1, 2021. | Photo courtesy of PDEA-7

MANDAUE CITY, Philippines — An estimated P41.5 million or P41.48 million worth of suspected shabu was confiscated in two separate buy-bust operations in a span of nearly two hours in Lapu-Lapu City on Friday afternoon, October 1.

Aside from that, police also arrested three persons, who were considered as high priority targets in the regional level of the police drug watch list.

Albiar said that the confiscated suspected shabu had an estimated market value of P14.28 million.

Later at past 4 p.m that day or nearly two hours after, the same operatives conducted another joint buy-bust operation in Barangay Pusok, Lapu-Lapu City.

This time they confiscated 4 kilos of suspected shabu and arrested two persons.

Albiar said that Reny Nabor, 48, and Rhodora Dayuha, 50, were caught with that amount of suspected shabu during the buy-bust operation in Sitio Mustang of the barangay.

She said that the 4 kilos of suspected shabu confiscated from the two suspects had an estimated market value of P27.2 million.

Also taken from suspects were a trolley bag, a hand bag, a sedan, and the buy-bust money.

All three suspects were detained at the Lapu-Lapu City Police Office detention cell pending the filing of charges.

Police Colonel Arnel Banzon, Lapu-Lapu City Police Office chief, reminded those, who engaged in illegal activities, particularly drugs, that they would be arrested sooner or later as well.

(Again, we warn those people, who engage in illegal drugs, that when you enter Lapu-Lapu sooner or later you will be arrested.)

Banzon said that the big haul was due to several months of monitoring from apprehensions of street level to high-value individuals in the past.

Albiar, meanwhile, said that both operations were in coordination with the Lapu-Lapu City Police Office City Intelligence Unit led by Police Major Bicoy and the LCPO City Drug Enforcement Unit and PDEA-7.

Aside from that, the Regional Drug Enforcement Unit in Central Visayas and the NAVFORCEN, Viscom and the NISG Central also participated in the joint operations.

Read Next
Barangay councilor denies killing cousin: Why would I ask forgiveness when I’m the one they had done wrong