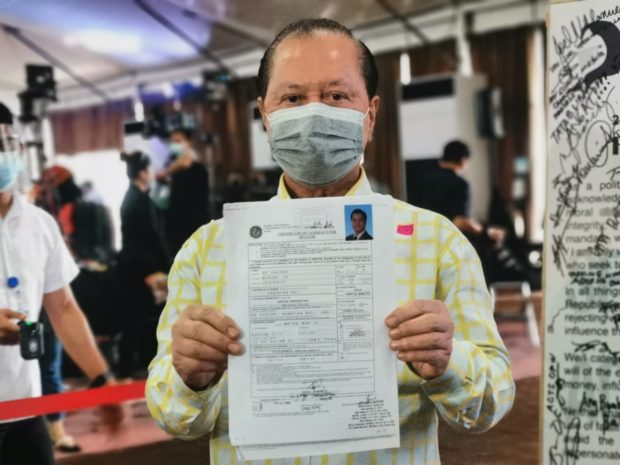 (I submitted my candidacy to the Comelec on Friday. But there are now change in my plans.)

De Castro further said that despite this decision, he will continue to lend his voice to the public.

(I want to inform all of my friends and supporters who was meant to help me, that I decided not to continue with my candidacy. Evenso, my aspirations for the country has not changed.)

The radio host took his oath as a member of the party a day before filing his certificate of candidacy last Friday.

Moreno said he “respects” the decision of the veteran radio host.

“We respect his decision to forego his re-entry into national politics, and wish him well because we know that he will continue to have the best interests of our people, as the Pambansang Kabayan, in his heart,” Moreno said in a statement.

“In truth, when my team was convincing him to run once more for the Senate, he contemplated it for a long time,” the party’s president added.

The party’s chairperson, Ernest Ramel, said that De Castro will remain as a member of the party.

“[W]e will continue to consult with him having vast experience in public service and his dedication to the welfare of the Filipinos,” Ramel said.

He added: “We are saddened by his decision but we wish him all the best in his future endeavors.”

INQUIRER.net reached the Comelec for confirmation if they already received De Castro’s statement of withdrawal, but it is yet to receive a response as of posting.