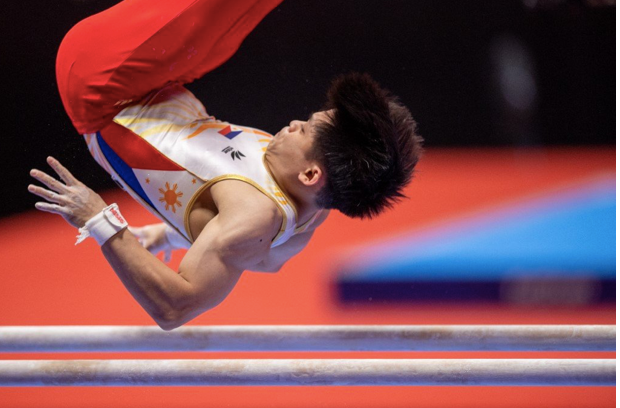 The Philippines’ Carlos Edriel Yulo competes in the parallel bars event at the men’s apparatus finals during the Artistic Gymnastics World Championships at the Kitakyushu City Gymnasium in Kitakyushu, Fukuoka prefecture on October 24, 2021. (Photo by Philip FONG / AFP)

MANILA, Philippines—It could’ve been a golden double but it was still a gallant stand for Carlos Yulo as he added a silver medal in parallel bars at the 2021 FIG Artistic Gymnastics World Championships Sunday at Kitakyushu City Gymnasium in Japan.

China’s Hu Xuwei, the sixth gymnast to participate in the event, knocked Yulo off the perch with a 15.466, 8.866 for execution and 6.600 for difficulty, to take the gold.

Japan’s Hashimoto Daiki finished fourth with a score of 15.000, while the USA’s Yul Moldauer took fifth at 15.000.

Moldauer, although tied with Hashimoto, placed fifth due to the execution tiebreak.

Switzerland’s Christian Baumann rounded out at the championship round in eighth with a score of 12.333.