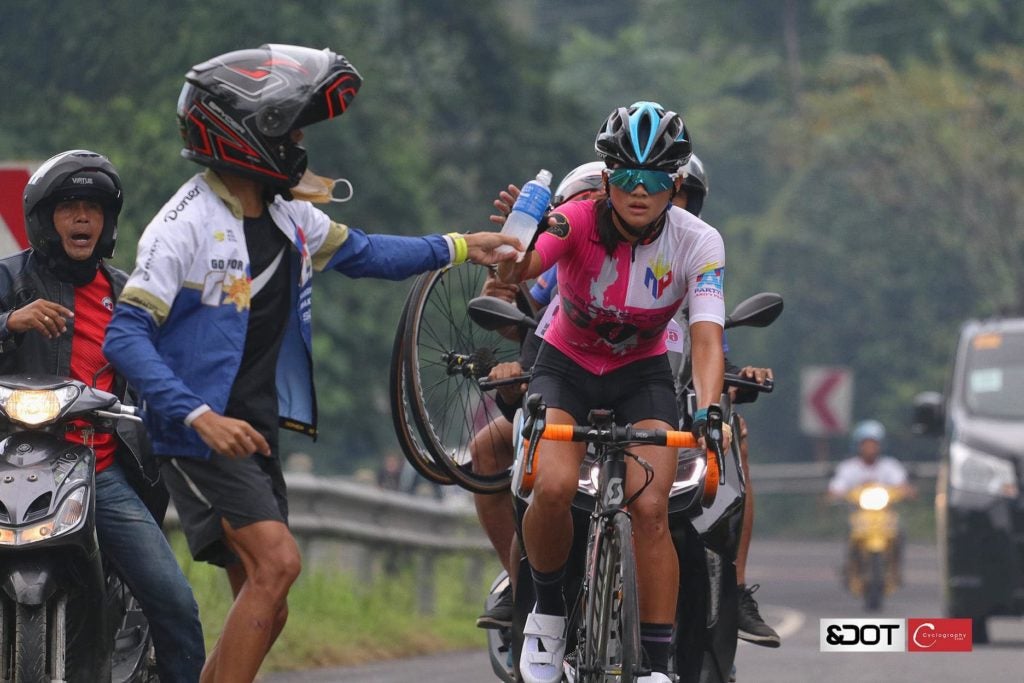 Raven Faith Alcoseba gets a bottle of mineral water from one of her teammates during the Cross Cebu 600 race. | Photo Courtesy of Cyclography

CEBU CITY, Philippines — Transitioning from one sport to another is a daunting task not many, including seasoned athletes, have succeeded in doing.

But Raven Faith Alcoseba of Talisay City is no ordinary athlete as she defied all odds in dominating the women’s division of the recent Cross Cebu 600.

Alcoseba, a varsity swimmer of the De La Salle University in Manila recently shifted to the more demanding sport of triathlon under the supervision of renowned coach Roland Remolino.

Last weekend, she ruled the women’s 100-kilometer race of the Cross Cebu 600, underlining her strength and potential in the sport.

For Remolino, last weekend’s race was enough to convince him that Alcoseba made the right decision to shift from swimming to triathlon.

On December 12, 2021, Alcoseba will have her mettle tested as she competes in her first duathlon race, the 2021 National Duathlon Trials in Clark, Pampanga.

Although it’s not a triathlon race, it will still test the Cebuana’s ability to be an elite triathlete.

What’s more impressive is that Alcoseba started training for a triathlon in the middle of the COVID-19 pandemic.

Despite the restrictions, she persevered and somehow improved a lot. But according to Alcoseba, that wouldn’t all be possible without the help of her teammates.

She admitted that her transition from one sport to another was difficult, but she persevered and remained motivated, thanks to her coach and teammates such as the 2019 SEA Games triathlon silver medalist Andrew Kim Remolino.

Read Next
Cebu City gears up for 2022 Bar Exams