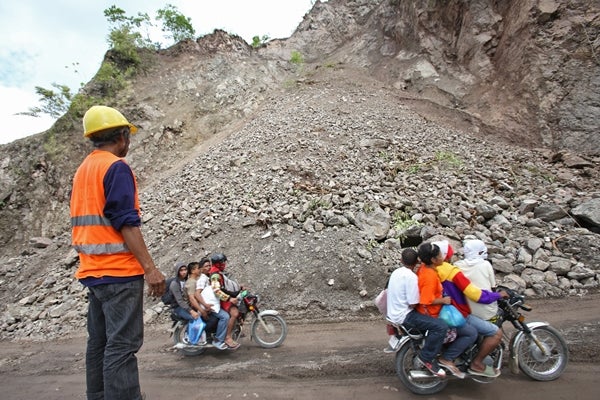 THE contractor of a road widening project in barangay Manipis, Talisay City wants an assessment from the Department of Environment and Natural Resources (DENR-7) of the 30 trees in the area before proceeding with their work.

“We also need cutting permits. We are also willing to plant new trees to replace the ones to be affected by the road widening project,” project supervisor William Abatayo of QM Builders told Cebu Daily News.

He said most of the trees affected have small circumferences and are not old.

Abatayo said a letter request will be sent anytime today to the DENR-7 office requesting for evaluation and assessment of the affected trees.

The half lane of the Manipis national road at Camp 5 in barangay Manipis has not yet been cleared of rocks and soil caused by last Thursday evening’s landslide.

Abatayo said they need to temporarily stop their project for them to clear the road. “It is unsafe for the motorists if we would not clear the area. We also assigned a watcher to guide the motorists who passed the area,” he said.

Pamor said they assigned watchers in the area. At night, lights were set up to help the motorists.

In last Saturday’s visit, Talisay City Mayor Johnny delos Reyes said motorists would be barred from the area during heavy rains for their safety.

As of 12 noon yesterday Vince Monterde, local disaster risk reduction (LDRRM) officer, said no families have been evacuated in the area to the temporary relocation site at the Lagtang market.

Talisay City Councilor Danilo Caballero, who visited barangay Manipis last Friday, said he asked the residents to relocate rather than risk being hit by a landslide.

Abatayo earlier said they cannot institute mitigation measures against landslides until the families are relocated to safer ground.