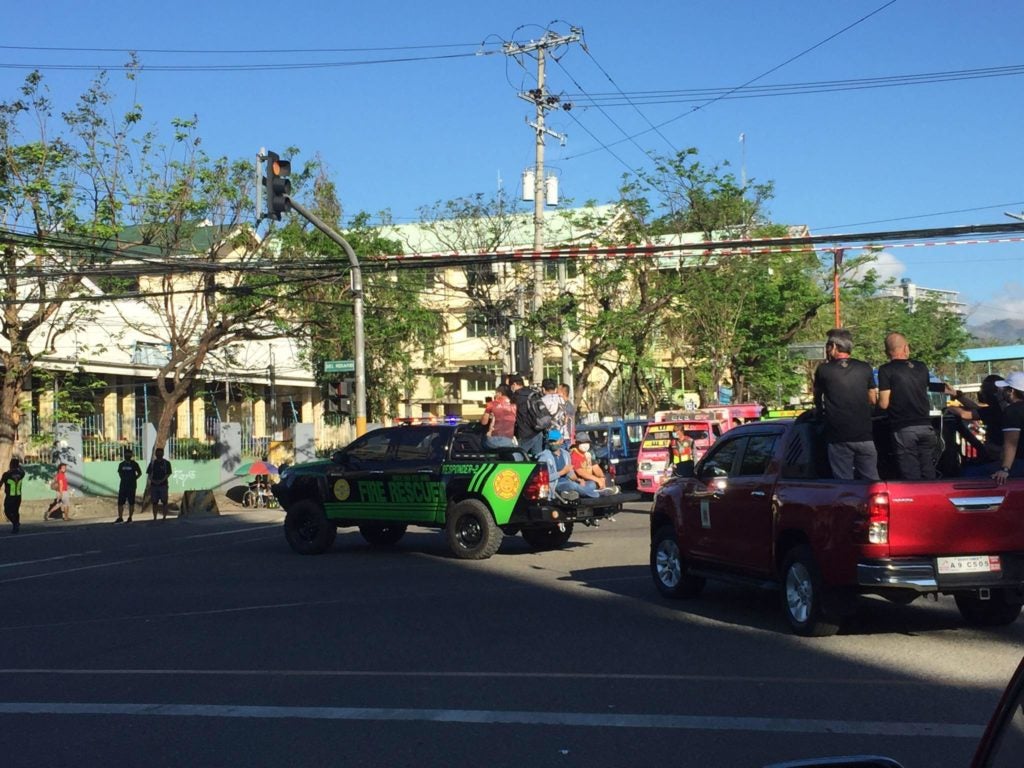 CEBU CITY, Philippines — Five vehicles, one of them designated to carry the Sto. Niño, simulated the mobile procession today, January 8, for the coming Fiesta Señor on January 15, 2022.

The dry run for the mobile procession was organized by the police and other concerned offices started at 7:40 a.m. today at the Basilica del Sto. Niño grounds and was completed nearly 3 hours later or at 10:39 a.m. at the place where it started.

Police Lieutenant Colonel Wilbert Parilla, Cebu City Police Office deputy director for operations, said that simulated motorcade would stop in different churches and this was to prevent an influx of people that might happen during this event.

The mobile procession dry run made stops in eight different churches and shrines.

At 7:40 a.m., the motorcade of 5 vehicles with the third vehicle carrying the image of the Sto. Niño left the Basilica, heading to the Catholic Church of Holy Cross in Cebu City then in St. Thomas de Villanueva in Barangay Pardo, Cebu City.

Then the motorcade headed to Talisay City where it made its third stop at St. Joseph the Worker Parish.

Then it headed north and making a fourth stop at the St. Joseph the Patriarch Parish in Barangay Mabolo, Cebu City.

Then the mobile procession made stops at the National Shrine of St. Joseph in Mandaue City and then crossed over to Mactan Island to the Nuestra Señora de Regla National Shrine in Barangay Poblacion, Lapu-Lapu City.

The motorcade then headed to Our Mother of Perpetual Help Church in Barangay Babag, Lapu-Lapu City, and then to the San Roque Parish in Cordova neighboring town of Cordova.

After that, the motorcade crossed the third Mactan-Cebu bridge — the CCLEX or the Cebu Cordova Link Expressway.

Then returning to the Basilica at past 10 a.m.

Parilla said that the motorcade or the mobile procession would only involve five vehicles and no other vehicle would be allowed to tail the motorcade.

He also said that during the simulated motorcade, the policemen, the traffic enforcers of respective towns and cities helped man traffic so that the motorcade could quickly pass through their areas.

IN PHOTOS: 457th Fiesta Señor in Cebu City kicks off

Things to remember for the start of the Fiesta Señor novena on Jan. 7

No Devotee City for Fiesta Señor 2022

Read Next
Telcos told: Do not charge fees for cut connections during typhoon