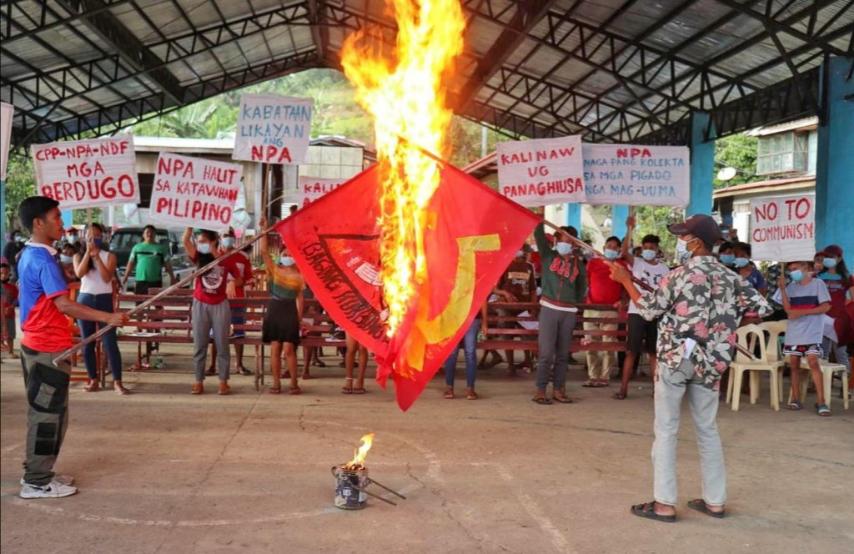 Residents of one of the localities in the Visayas burn the flag of the Communist Party of the Philippines (CPP) New People’s Army (NPA). | VISCOM photo

CEBU CITY, Philippines – Communist groups in the Visayas have started to become “irrelevant” with the weakening of public support that they are also getting, according to Lieutenant General Robert Dauz of the Visayas Command (VISCOM).

In a statement, Dauz said, community engagement by government forces through the implementation of their Community Support Program (CSP) and the national government’s Barangay Development Program played a major role in convincing the public to instead support the government’s peacekeeping initiatives.

“With our sustained community engagements, the people in the region started to break free from the clutches of the communist terrorists while embracing the active role in the government’s peace and development initiatives. This is manifested in the increasing number of information provided by the community which translates into successful internal security and law enforcement operations by your government forces,” Dauz said.

From January 1, 2021, to January 29, 2022, a total of 8, 174 local government units here have declared the Communist Party of the Philippines – New People’s Army (CPP-NPA) as persona non grata in their respective localities.

Of the declarations, a total of 7,759 were issued at the barangay level while 364 came from the different municipalities in the Visayas.   A total of 39 cities and 12 provinces also issued the same declaration.

Dauz said these declarations serve as proof that rebels are no longer welcome in the different localities here.

As they continue their fight against insurgency, Dauz is also asking members of the few remaining communist groups in the Visayas to already return to the fold of the law.

“Your reign of terror in the Visayas are numbered. VISCOM and its subordinate units, being the Servants in the Visayas will never falter in our commitment to sustain peace and foster development for the people in this part of the country. Lay down your arms, abandon your armed struggle, and head to the call of the government for genuine peace. Return to the fold of the law, avail of the government’s local integration program, and live a peaceful and progressive life with your families.” he said.